After dropping three points in the last match, Boreham Wood take on Chesterfield for their next league game. The Spireites also lost two points in their last meeting.

Both teams have been quite the same in their recent league games with two winnings, two defeats, and one draw. But Boreham Wood have a long and incredible streak of wins and unbeaten games in their home stadium. On the other hand, Chesterfield are also unbeaten in the last three away duels with two draws and one victory. Moreover, the only home side of the recent H2Hs has been able to take the lead while three of the last six ended in a draw. So we expect a tight contest in this game and expect a win for the hosts as they look to continue their promotion assault.

Chesterfield has hit the back of the net at least twice in three of the last five meetings. On the other side, The Wood lacked in some of their recent games but the hosts have been able to produce nine goals in the last five home duels. Three of the last five H2Hs of the teams displayed a total of over 2.5 goals. So we expect the same trend to be followed in this game.

Based on the recent scoring drift of both teams, there seem high chances to witness both teams on the scoreboard. The Wood missed the chance to score in two of the last five meetings but have scored in all of the recent home games. On their other end, Chesterfield also scored in all of the previous away meetings. three of the last five H2Hs also featured the same pattern.

The Wood got their consecutive second away defeat in the last game against Wrexham. Boreham Wood are currently fifth on the table but have an advantage of games in hand. The club will also be eager to make a difference in the table as they face the second team of the points table with the home benefit. The team manager Luke Garrard owns a completely healthy squad ahead of this game.

The Spireites would be furious about the last game’s result where they lost the lead by giving an own goal in the last minutes of the game against Southend, drawing 2-2 at the end. But Chesterfield are second on the table after 32 games, losing only four out of them. Kabongo Tashimanga will not be available for the coming game due to injury.

Top Betting Odds and Stats for Boreham Wood vs Chesterfield

FAQs regarding Boreham Wood vs Chesterfield Coverage and Accessibility 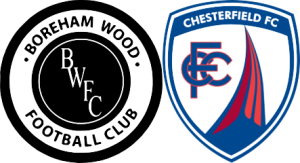 Who is the bookmakers' favourite to win? Boreham Wood.