Boreham Wood will face Notts County in one of the games from the second round in the English National League.

Both teams won their opening games in the league and will be motivated to continue their season with a second victory. Here are our predictions for this game.

Boreham Wood and Notts County were two of the best teams in the previous season but they will have to face another season in the National League. In the previous season, they had completely different stats – Boreham Wood were one of the lowest-scoring teams with one of the best defenses while Notts County were among the highest-scoring teams in the league. We expect a difficult game for both teams with few goals overall.

Three of the last five times these teams played, the games ended in a draw. With the good form of both teams in the new season, we expect neither to lose this game and we think that the draw is the perfect choice. There is a lot of value – both teams have great defenses and are in good shape right now. We believe that the most likely result for this game is the 1:1 draw.

As mentioned above, the best result for this game should be the 1:1 draw and there is a lot of value in this market if you are looking for a high-odd option. The performances of both sides in the first game showed us that they will both be fighting for the top this season and they cannot afford defeats against a direct opponent for the promotion. Most games between them in recent years had goals from both sides.

Boreham Wood were one of the best teams for the better part of the previous season and only started losing in the final months of the campaign. Unfortunately, they lost their position in the playoffs and finished in 9th place, right below the promotion zone. They had the third-best defense in the league but were also one of the lowest-scoring teams with just 49 goals in 44 games. We have high expectations for the team in the new campaign.

Notts County are another one of the best teams in the National League and they reached the playoffs with ease in the previous campaign. Of course, they lost and will have to try again this season but their performances last year were nothing short of incredible. The team scored 81 goals in 44 rounds, which is the 4th best stat in the entire league. They appear to be in great shape at the start here and we expect them to be one of the main contenders this season too. 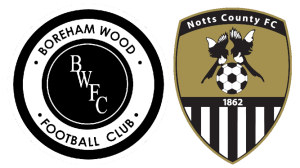 This fixture has been scheduled for Boreham Wood's home ground – Meadow Park.