In this betting preview, we look at the international friendly between Bosnia-Herzegovina and Montenegro at the Stadion Grbavica, Sarajevo on June 02.

Montenegro to Win or Draw

Bosnia missed out on qualification for the European Championships owing to their poor form in international meets. They are winless in their last eight matches at home. On the contrary, Montenegro have impressed on the road and have only tasted defeat twice in their last twelve away fixtures. They have enough pedigree to take on the challenge of Bosnia and claim bragging rights over their neighbours.

The Bosnians have not scored in their last five matches at home turf. The Under 2.5 scoreline goes further back with six matches seeing less than three goals. Montenegro have seen a similar return in their away trips. The Over 2.5 prediction has only come true twice in their last five fixtures, their rivals outscoring them for the first one, while it was their 1-2 victory that allowed them to take the plaudits. With little to expect from Bosnia in this fixture, the Under 2.5 should be realized in this fixture.

Ibrahim Sehic has only kept one clean sheet in his last eleven appearances in goal for Bosnia & Herzegovina. Their problems stem from their inability to get on the scoreboard and have not scored in their last five home fixtures. Given their precarious form, which looks unlikely to go away in one night, the BTTS is unlikely to come true at the Stadion Grbavica.

The Bosnians are ranked 56 in the FIFA rankings but have seen their fortunes dwindle in recent international outings. They missed out on qualification to the upcoming European Championships after a penalty-shootout loss to Northern Ireland. Bosnia-Herzegovina can undo their poor form with a result against their rivals. However, it will be easier said than done given their inability to find a reliable attacking outlet to provide the goals.

While Bosnia have stuttered, their southern neighbours have impressed. The Montenegrins have been in fine form, especially on the road. They have only faced two defeats in their last twelve outings, owing largely to their improved defensive performances. This away form has seen them keep seven clean sheets, six more than their rivals on Wednesday night. In attack, Stevan Jovetic continues to impress. The attacker has four goals in his last four international appearances and will need special attentional from the Bosnian defence.

Top Betting Odds and Stats for Bosnia-Herzegovina vs Montenegro

FAQs regarding Bosnia-Herzegovina vs Montenegro Coverage and Accessibility 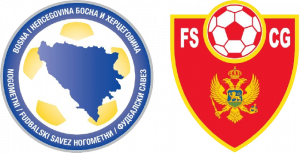 The match will take place at Stadion Grbavica.

COSMOTE Sport is the place to watch the live broadcast on television. One can also watch the game from the numerous live streams available from bookmakers.