February begins with an entire round of League Two football and eight great games on Tuesday. A lot of teams are in the promotion race and this round could lead to serious shifts in the standings. The first game is between Bradford City and Leyton Orient.

Bradford City and Leyton Orient are two identical teams if we refer to their performances throughout the season. The two teams with the most draws will face each other in a match that could put them next to each other in the standings.

Bradford City and Leyton Orient have played a lot of games against each other in recent years. In all those games, there were few or no goals and we expect something similar out of this upcoming fixture. Leyton Orient are not in a good place – the team lost four of its last five league games and in those matches scored just a single goal. While Bradford are not a particularly strong team, we do not expect more than a goal from the visitors and also not more than one or two from the hosts. We believe that this game will not present us with a lot of action overall.

As mentioned above, these are the two teams that have had the most draws this season – Bradford – 12; Leyton Orient – 11. While this doesn't mean that this match will end with such a result, we expect it to happen for a couple of good reasons. Leyton Orient have not won amatch in more than two months. All of their recent league games were against top teams (in League Two, of course), and they lost all but one.

Bradford City are not as good as their previous opponents and are a team that struggles to make the difference. They often concede goals that lead to undeserved draws. These teams are completely equal in strength and neither is in perfect form.

We expect this game to end with a single goal from both teams or in other words – 1:1. Leyton scored a single goal in their last 5 games and also did not score at all in their last three outings. Yet, Bradford City concede goals – their defense has not been efficient and we expect that Leyton Orient will be motivated for at least a draw against a weaker team. Yet, we do not see them scoring more than once.

Top Betting Odds and Stats for Bradford vs Leyton Orient

FAQs regarding Bradford vs Leyton Orient 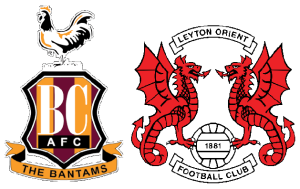 • In which places are the two teams?

This fixture will be played at Bradford's home stadium – the Valley Parade, which is one of the oldest grounds in England (1886) and has a capacity for 25,136 spectators.

Like the entire round, this match begins at 19:45 UTC on Tuesday.