Bradford face Newport in the first game of the 39th round in League Two.

With eight rounds remaining in the season, Bradford have nothing to fight for as the difference between them and the promotion zone is too large. Newport, on the other hand, need all the points they could get.

Bradford and Newport have had completely different seasons but we expect to see loads of goals in this fixture. Newport are one of the two teams with the most games with over 2.5 goals this season – they had 24 overs in 38 rounds. On the other side, Bradford have had just 16 over 2.5 games in 38 rounds. It is true that the previous match between them ended in 0:0 but this is a truly important part of the season and Newport should be at their best.

Bradford and Newport have played only five times in their history and Bradford won just a single fixture out of those five. Three were won by Newport and the last one from this season ended in a draw. Newport are much higher in the standings and they need the points desperately, so we expect this to be a draw or a win for the visitors. To be safe, we pick the draw no bet option.

Bradford's recent results have been interesting and generally, it is hard to catch when they will be good or bad. They won against Forest Green and Hartlepool on the road and then lost at home in the next round. They have scored few goals total this season and their defense is definitely not among the good ones either.

Newport allowed a shocking defeat in the previous round and we believe that this was a one-time case and it will not repeat itself in this round. They have been in great form lately and had three wins in a row before this defeat. They are a much better team than Bradford and one of the highest-scoring teams in the league.

Top Betting Odds and Stats for Bradford vs Newport

FAQs regarding Bradford vs Newport 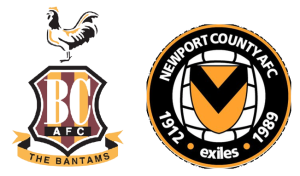 In which places are Bradford and Newport?

Bradford will finish the season at the middle of the table unless they win all of their remaining games. They are currently 15th with 46 points. Newport remain in the promotion zone but their position is at risk – they are 6th with 62 points.