Bradford and Port Vale surprised us in the previous round as both sides won against very difficult opponents. Now, they will face each other in the 38th round.

Port Vale and Bradford have had an interesting rivalry over the years that often had close games with unexpected results. This game is much more important for Port Vale as they remain in the promotion race while Bradford have no chances at this point.

As mentioned already, Bradford and Port Vale have played a bunch of games and most of them in recent years had loads of goals. At least, when it comes to BTTS, both teams scored in four out of the last five head-to-head games. Bradford concede a lot of goals and score considerably while Port Vale have one of the strongest defenses. Nevertheless, both sides appear to be in good shape, so we expect goals.

We think that Port Vale are the better team and they have a better chance to win this match. Overall, they have always been the better side in head-to-head games. In the last five meetings, Port Vale lost only once. The previous match between them this season ended in a 1:1 draw and this is also a possible result for this match too. In each case, we expect Port Vale to take something out of this game.

Both teams take a considerable number of corners – not too many but more than the majority of teams. It is important to note Bradford's performances at home. The team has taken a lot of corners at home – 6.28 on average in all of their games this season. We think that the line of 5 will be covered without problems.

Bradford seemed like the season for them is over as they had five consecutive losses. Then they surprised us two rounds in a row with their wins against Forest Green and Hartlepool on the road. Port Vale will be a serious challenge but if Bradford show the same strong performance, they might stand a chance here too.

Port Vale lost their position in the playoff zone and now need all the points they can get to regain their placement. The team has been quite impressive lately and mostly had positive results – only a single defeat in 10 games. However, a lot of their matches ended in draws – 5 out of the last 10.

Top Betting Odds and Stats for Bradford vs Port Vale

FAQs regarding Bradford vs Port Vale 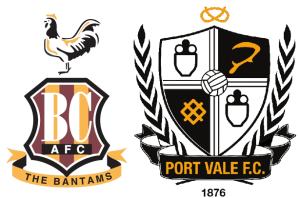 In which places are Bradford and Port Vale?

Bradford and Port Vale are not far from each other in terms of places but there is a big point difference. Bradford are 13th with 46 points while Port Vale are 9th with 56 points.