Bradford and Rochdale go head-to-head for three League Two points when they meet on Saturday. Read our free predictions and find the latest odds for the fixture below in our match preview.

Can promotion hopefuls Bradford get back to winning ways at home to Rochdale on Saturday? Read our top three predictions for this weekend’s fixture below.

Bradford have gone off the boil of late and The Bantams’ dismal five-game winless run has seen them slip towards League Two’s midsection. The hosts could be without several key first team players for their latest test against Rochdale on Saturday and they could be worth opposing again as a result. The Dale have taken seven points from the last nine on offer on the road and they can avoid defeat again here.

Both teams to score bettors have plenty of promising statistics to peruse ahead of Bradford’s clash with Rochdale this weekend. Three of City’s last four League Two assignments produced goals at both ends while BTTS also landed in 100% of Rochdale’s away games this term. With clean sheets in short supply in both camps, the same bet appeals at the prices on offer on Saturday.

Rochdale have adopted a brave approach in their away games this season and their philosophy has reaped dividends. The front-foot ideology has also produced plenty of entertainment, indeed, three of their four away tussles in League Two since the summer have passed the over 2.5 goals line and we expect that pattern to continue when they visit Valley Parade.

Bradford could be without key midfielder Charles Vernam and attackers Lee Angol, Caolan Lavery and Theor Robinson this weekend, while captain and integral defender Niall Canavan is also expected to be absent. City's form is worryingly poor at present and with so many personnel potentially out, their five-game winless run could be extended by Rochdale.

Defender Sam Graham is sidelined and won't feature this weekend, though Rochdale have a relatively clean bill of health elsewhere. The Dale lost their Greater Manchester Derby clash with bottom club Oldham at the weekend and they will be determined to bounce back against Bradford to appease their disgruntled supporters.

Top Betting Odds and Stats for Bradford vs Rochdale 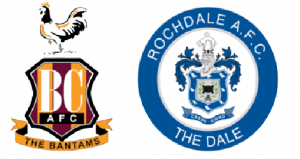 Saturday’s fixture will be played at Valley Parade.

Is the game being shown live on TV?

Unfortunately, Bradford’s clash with Rochdale is not being shown on TV.