Bradford face Scunthorpe in another fixture from the 44th round in League Two.

These two teams have already finished their seasons – no matter what happens in the last three rounds, it will not change their position or achievements.

Normally, we would go against a goal for Scunthorpe mainly because they have scored one in about 2-3 games of their last 10. However, Bradford's form is almost as bad as theirs and we expect a lot more action from this match than we are used to from these teams. Bradford won only 2 of their last 10 games and conceded a goal in most too.

There is no point in betting for Bradford in this fixture. We might see a surprise like the previous draw and it would just be a huge disappointment. Therefore, if you have to pick a match result, pick the draw. Both sides are in terrible forms and while Bradford should be the better team overall, their recent performances are not convincing enough to believe that they can win against any team.

Bradford had a rough season and the expectations were much higher. For some time, they looked promising but then came the terrible performances. The team's main problem has been the defense – their attack is not terrible but not good enough to fix the mistakes of the defense.

Scunthorpe have been the worst team in the league since the start of the campaign and they simply couldn't manage against most of the teams in the league. It felt like they abandoned the season a long time ago but the reality is that their level is simply lower than the majority of teams in League Two. After 43 rounds, their goal difference is 27:80.

Top Betting Odds and Stats for Bradford vs Scunthorpe

FAQs regarding Bradford vs Scunthorpe 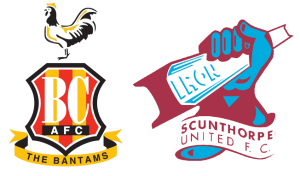 In which places are Bradford and Scunthorpe?

This match has been scheduled for Bradford's home ground – Valley Parade.