This preview will look to find if Stevenage will be able to maintain their 100% start to the League Two 2021-22 campaign when they travel to the Utilita Energy Stadium to take on Bradford City in the midweek action.

Bradford picked up the first win of the season after a well-deserved 2-1 success over Oldham at home. Stevenage continued their excellent start to the season with a 2-0 win over Bristol Rovers that came late on through goals from Chris Lines and Luke Norris.

Bradford have been quite solid in the early stages of the League Two campaign and they even came close to causing an upset in the League Cup match against Championship outfit Nottingham Forest. Their weekend match against Oldham saw them come up with a solid performance. Even though Stevenage have come up with three excellent results in the league and League Cup, the team may struggle against Bradford, who are regarded as one of the favourites for the title.

The last two matches have seen Bradford and Stevenage create some decent defensive performances. Both have been rewarded with two goals in the latest league match. Bradford have a very strong squad and Derek Adams’ men are in a good position to build something strong at home – unlike the finish that they had towards the end of last season.

Both teams to get at least a goal

Stevenage have been able to get at least a goal in all of their competitive matches this season. The team has been playing some brilliant football and they are likely to be rewarded in this away match considering that Bradford do not have the greatest defence.

Bradford are aiming for the title and the victory over Oldham finally gives the team a positive result that they had been waiting for the last few weeks. The manner of the success over Oldham once again suggests that Bradford should be taken seriously for this season. There are no injury worries for Derek Adams.

The positive set of results in the opening two rounds of the campaign have increased expectations about the team picking up from where they left off last season. In the second half of the 2019-20 season, Stevenage were almost showing play-off form. Manager Alex Revell does not have any fitness worries ahead of the game.

Top Betting Odds and Stats for Bradford vs Stevenage 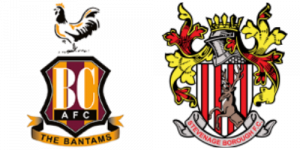 The Utilita Energy Stadiumi is the place where this match will be held.

Bradford come into this match as the favourites to win the game.