Bradford City host Tranmere in a match that is of huge importance for the visitors for their chances this season.

Tranmere continued with their winless games and are now standing below the playoff zone despite their incredible performances for the better part of the season.

Bradford and Tranmere are two of the teams that have had the fewest goals this season and until recently, Tranmere also had one of the strongest defenses in the league. They have been conceding a lot of goals lately and this is why we expect that Bradford will score in this fixture. They have been losing most of their home games lately but they actually score a lot of goals. This will be a difficult match for both teams.

Surprisingly, Bradford City are the favorite in terms of odds here but we think that we might see a draw in this fixture. The first game between these teams ended in a 2:1 win for Tranmere. Both sides are in terrible form right now. At home, in particular, Bradford have not win in eight consecutive games and had a bunch of defeats in a row. On the other side, Tranmere have been terrible on the road and have not won in seven consecutive matches. With these forms, we expect to see a draw in this match.

We all had much bigger expectations from Bradford this season but they failed miserably and have no chances for anything at this point in the season. Their main problem has ben the defense and they need to look for serious improvements with transfers after the end of this season.

Tranmere were one of the strongest teams for the better part of the season and spent most of the time near the top of the league in Top 3. Their terrible away form and several series of winless games put them behind even the playoff zone and they need all the points they can get in the remaining fixtures to even stand a chance for the promotion zone.

Top Betting Odds and Stats for Bradford vs Tranmere

FAQs regarding Bradford vs Tranmere 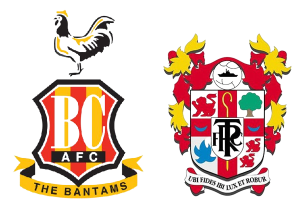 In which places are Bradford City and Tranmere?

Bradford City are one of the teams with the most draws this season and the fewest wins, which put them in 15th place with 48 points right now. On the other side, Tranmere fell all the way to 9th place and have 65 points after 41 rounds.