Brescia will host Perugia in their own play-off quarter-finals that will determine which team will remain in Serie B.

Perugia managed to qualify for the playoffs with their final game and a great dose of luck, and now have to face one of the top teams in the league.

We wrote about this fixture a few months ago and we have similar expectations. We think that with the importance of this fixture and the good form of both teams, we can expect both teams to score. It happened in 4/5 recent cases when Brescia were the home team and they already played this match and it ended in a 2:1 win in March.

We think that there will be a surprising draw in this fixture. It is a fact that Brescia are the absolute favorite here and they have generally been the better team this season. Their home stats are 8/8/3, which means that they had 8 draws in 19 games. On the other side, Perugia are the 3rd best away team this season and have the exact same stats but on the road – 8/8/3.

Brescia and Perugia are the two teams in the league that have taken the most corners in their most recent five games and the stats are quite impressive. In Brescia's case, the team has taken an average of 7.40 corners in its last 5 games while Perugia have been even more impressive – 8.40 corners on average. Even if their performances were more like their seasonal stats – 6.2 and 4.65 corners on average for the entire season, we would expect over 9 corners.

Brescia were one of the top teams and one of the main contenders for promotion throughout the entire season but they ultimately failed in the last few rounds. Nevertheless, they had a great season overall and have one of the best defenses in the entire league. In 35 rounds, their goal difference is 55:35.

Perugia finished the season with an incredible dose of luck. They ended with the same number of points as Frosinone but the other team lost two consecutive games and failed due to goal difference. Not that Perugia do not deserve this playoff chance but they have one of the weakest attacks in the league. On the other side, they also have one of the best defenses in the league with just 32 conceded goals in 38 regula season games.

Top Betting Odds and Stats for Brescia vs Perugia

FAQs regarding Brescia vs Perugia 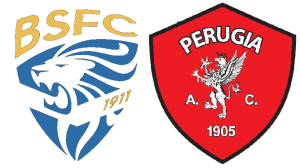 • In which places did Brescia and Perugia finish the season?