Bristol Rovers host Bradford City in a crucial fixture for a place in the playoffs on Saturday.

Bristol Rovers' recent defeat put their place in the playoffs on the line and they need the win here or they might lose this position.

Bristol and Bradford are not among the teams with the most goals this season – Bristol Rovers had 17 overs in 39 rounds while Bradford had 16 in 39 games. Nevertheless, we have a lot of history between these two teams and most games between them ended with a lot of goals. Four of the last five h2h games ended with over 3.5 goals actually. The first match of this season ended in a 2:2 draw.

Bradford have the ability to beat every team and then again to lose against every team. The season is over for them – there is nothing to play for at this point while this game is crucial for Bristol's future. We think that they are in incredible form, especially at home, and they will do whatever it takes to win this match. Bristol lost a single match at home in their last 10 and actually won 7 of their last nine too.

Both teams take a considerable number of corners but with the importance of this match and Bristol's recent results, we think that the over 5.5 is a great line. Moreover, the odds are extremely high. Bristol Rovers took an average of 6.40 corners in their last five games and also, they took 6.00 corners on average in their last five home games alone. We think that they will be the team that controls the pace and the ball, so we expect a lot from them here.

Bristol Rovers were quite active in the last transfer window and got some serious names for the level of League Two. They made some serious improvements in the front line with two forwards from League One and To and an attacking midfielder from 2. Bundesliga. They are motivated to get promoted to League One at the end of this season.

Bradford also made some improvements in their team and especially in attack with players coming from Mansfield and Port Vale. It is late for this campaign, however, so Bradford should look to improve upfront for the upcoming season. They definitely need to improve their defense in the summer window now that the attack got the necessary boost.

Top Betting Odds and Stats for Bristol Rovers vs Bradford

FAQs regarding Bristol Rovers vs Bradford 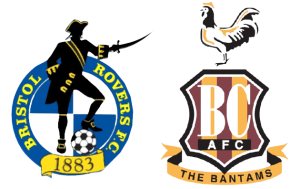 In which places are Bristol Rovers and Bradford?

Bradford will finish the season in the middle. Right now, they are 14th with 47 points. On the other side, Bristol Rovers are fighting for promotion with 10 other sides. Currently, they are 6th with 63 points.

This match has been scheduled for Bristol's home ground – the Memorial Stadium.