Bristol Rovers are back at the Memorial Stadium for a game against Oldham in the midweek action. Joey Barton’s men are hoping to overturn a disastrous start to the season and this preview will hope to provide the top betting tips for this match.

Bristol Rovers suffered a third consecutive defeat in all competitions after the 2-0 loss against Stevenage. Oldham were unable to stop losing back-to-back league matches after a 2-1 defeat against Bradford City.

Bristol Rovers may have lost three consecutive matches, but the team did play relatively well in the recent game against Stevenage. Even though most of the chances created by Bristol came from set pieces, they only lost towards the end. Oldham have the potential to trouble any team with their long ball tactics and Bristol are no different. However, Joey Barton’s men will be able to get a victory provided that they start the match well and get the home fans on their side.

The opening three matches have seen Bristol get only one goal. After failing to score against Newport County, Oldham have come up with goals in back-to-back matches. The visitors have the opportunity to score even when they are not playing well thanks to the direct style. Meanwhile, Bristol are aiming to score against Oldham for a seventh consecutive game.

Both teams to get at least a goal

Oldham can cause any opponent a lot of problem with the direct approach. Bristol Rovers are looking low on confidence going forward, but a positive mood from the home supporters could change the scenario. Furthermore, Bristol do have a good record against Oldham with goals in the last six encounters.

Bristol Rovers and Barton are coming under a lot of pressure after a poor start to the season. Even before the season began, there were plenty of discontent amongst supporters towards the former Newcastle midfielder. If Barton fails to turn things around in the next couple of matches, Bristol could be saying a premature goodbye to their promotion hopes this season.

Oldham manager Keith Curle does not fear criticism about the style of football that he likes to deploy. The back-to-back defeats in the league, though, are starting to raise concerns, as Oldham are placed as one of the favourites to get relegated.

Top Betting Odds and Stats for Bristol Rovers vs Oldham 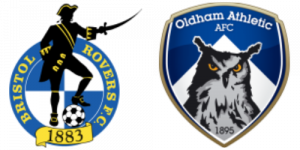 The Memorial Stadium will be the destination for this match.

Bristol Rovers come into this match as the favourites to win the game.