In this National League fixture, Bromley hosts Notts County on January 29. The Ravens will be looking to build on their win over Woking while the visitors get over the dropped points in their away draw against Wealdstone.

Both Bromley and Notts County head into this fixture in sparkling form. Both sides have claimed four wins in their last five competitive outings and are fighting amongst each other for the top-eight places. It is the Ravens who we are backing to claim the three points on offer thanks to their three wins in their last four home fixtures. In the same amount of away affairs, Notts County has just one win to their name. With their two meetings in Hayes Lane meeting a similar fate, we are backing a home victory.

Notts County has scored six goals in their last five away fixtures. However, four of these came in one outing and they have been shut out on two occasions. On the other hand, Bromley cannot stop scoring at home with eight goals in the same amount of outings at Hayes Lane. Add to the fact that three of these fixtures concluded with Over 2.5 goals and our confidence in our picks increases.

Notts County's away form is dubious as they have been shut out on two occasions. However, on each occasion that the Magpies have scored, they have also conceded. Couple this with Bromley's form in recent weeks which has seen them keep two clean sheets. Nevertheless, a glance at their meetings in the last two years shows backing BTTS is the right move. Four of their five meetings have seen goals at either end of the pitch and this affair should not be any different.

Andy Woodman will be pleased with how Bromley have responded to his rallying call. The Ravens are knocking on the doors of top-three, falling out of the automatic promotion slots thanks to their poor goal difference. They have worked on this end with two clean sheets in their last six outings to rid themselves of the playoff lottery.

The Meadow Lane was buzzing with excitement as Notts County finished fifth last season. Halfway through the season, the Magpies are in the vicinity of repeating their heroics. However, Ian Burchnall will have greater designs for his charges. Notts County are part of the nine-team club that are locked in the title challenge and are six points adrift of pole position.

Top Betting Odds and Stats for Bromley vs Notts County

FAQs regarding Bromley vs Notts County Coverage and Accessibility 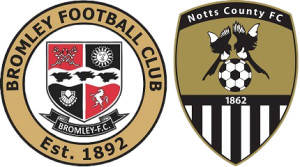 Where is the game being played? Hayes Lane.

Who won the last Head to Head fixture? Bromley and Notts County played a 1-1 draw.