This preview looks into the Danish Superliga Championship round between Brondby and Midtjylland at the Brondby Stadium. The hosts are looking to cut down a four-point deficit to the top of the table, which is occupied by Midtjylland.

Brondby have dropped four points behind Midtjylland, who are favourites to finish top of the Championship group. The two teams do have a substantial advantage over the UEFA Conference League qualifiers. The top tips for this match are:

Brondby have been unable to put together a run for the top spot largely due to their indifferent home form. A run of just three wins in the last eight home matches does not make for good reading. Brondby have also picked up just one home win since the Championship round of games began. Fortunately, Midtjylland’s away form is not great with the team only beating AGF in the last six trips.

The biggest problem for Brondby has been keeping the opposition out at bay. The team has struggled with clean sheets even in home matches, as Randers are the only team to have not scored at the Brondby Stadium since February. Midtjylland will have opportunities and they have demonstrated a knack for scoring away goals. There have been over 2.5 goals in four of the last six games between Brondby and Midtjylland at the Brondby Stadium.

This match features two teams with varying degrees of problems. Brondby’s defensive record is not great while Midtjylland have been able to consistently find the back of the net at the Brondby Stadium. After scoring in the last six visits to this ground, Midtjylland will be super confident of finding the back of the net.

Brondby’s decent start to the Championship round has just been made difficult following the away defeat against Randers. Even now, Brondby remain just four points away from the top. The team has to contemplate a run of difficult matches which are away from home before the season’s conclusion.

Midtjylland come into this game with one of the few problematic areas being the away form. After picking up six consecutive wins at home, Midtjylland have been able to jump to the top of the table. Yet, retaining this position – amidst strong pressure from Brondby – could be possible only with the assistance of home form.

FAQs regarding Brondby vs Midtjylland match 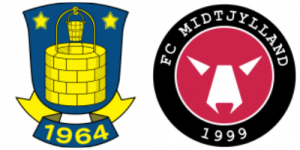 The Brondby Stadium will be the location for this game this weekend.

The favourite team to get three points from this match would be Midtjylland at odds of 11/10.