Despite the international break now upon us, the 2021/2022 EFL trophy continues with a series of crucial clashes. Group 11 sees a pivotal match between two league sides as MK Dons host Wycombe. MK Dons were 2-1 victors over Burton Albion in matchday 1 whilst Wycombe will be looking to bounce back into contention in the group after they suffered a defeat against Aston Villa Under 21s in their opening game.

Top Free Predictions for Burton vs Aston Villa Under 21s

Soccer predictions at FGG contain no bias and have been researched using the latest team stats, news, and available data. Here is how we are tipping Burton vs Aston Villa.

This young Aston Villa side have to be delighted following the start they have made to this years EFL Trophy. Facing a solid established league side in Wycombe, Villa had far too much for their more experienced opposition running out comfortable 3-1 victors. Burton head into this clash following some indifferent results in the league. The Brewers have only won one of their last five and this clash could provide a welcome distraction to their concerning league form. Despite being the more experienced side, Burton could make several changes ahead of this match giving some of their squad some rare game time. We are backing Villa to continue where they left off and make it back to back successive victories.

Clean sheets have been a real problem for Burton as they haven’t been able to keep one in the last five matches that they have played. Both teams have scored in four of their last five with the only instance being a 2-0 defeat to the hands of Crewe. Coming up against a young side with lots of exciting attacking talent we think the Brewers poor run of keeping clean sheets will continue here and we are backing both  teams to score.

Despite Burton struggling for victories in the league they have been competitive in the matches that they have played. To hedge against our previous prediction of both teams scoring, it might be worth chancing the under 2.5 goal market. Burton in their last five have only seen 2.5 goals achieved in two of their last five. If the match is tight it might be worth chancing under the 2.5 goal market.

The Best Match Odds for MK Dons vs Wycombe 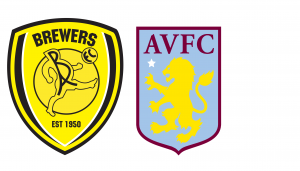 The match will be played at the Pirelli Stadium, Burton

This is the first match between the two