This is a preview of the Italian Serie A match between two outfits who are very close to achieving mathematical safety from relegation. Fiorentina travel to Cagliari for this crucial midweek match.

Cagliari are still not entirely safe from relegation while Fiorentina will feel almost safe after opening a seven point advantage over the bottom three. The tips for this match would be:

Fiorentina have displayed sensational momentum over the last few weeks. The impressive win over Lazio will further act as an impetus for the team to get another win, which will put them safe from relegation. Cagliari went out of the bottom three with a win over Benevento. Leonardo Semplici has seen his team register four wins in the last five games – a form which is even better than the run put together by some top teams. Cagliari are in the top five based on recent form, but Fiorentina have been playing slightly better without defensive mistakes.

This is a match between two outfits who have shown a lot of momentum in recent weeks. They have been able to get 10+ goals in the last six matches. Some of the individual names in either team have been doing a brilliant job. As both teams are in an excellent run, there could be goals at both ends.

The last two meetings between Cagliari and Fiorentina may have finished with a grand total of one goal but both outfits have been able to create several chances in the last few matches. Defensively, Cagliari are not very solid and they committed some basic errors even in the win over Benevento. The same goes for the La Viola even if they managed a clean sheet recently.

Cagliari can now almost smell safety and it has been an incredible job from Leonardo Semplici so far. A return of four wins in the last five matches is a form that even the likes of Juventus and AC Milan cannot show. The response from Cagliari to the threat of relegation has been excellent, but the job is not done yet. Gastón Pereiro, Marko Rog, and Riccardo Sottil are unavailable.

The massive win over Lazio has put Fiorentina on the verge of safety. They have 38 points – a seven-point advantage over the bottom three. The form of some key players like Vlahović has been nothing short of sensational. In the process of scoring 21 league goals so far this season, Vlahović has almost helped the club achieve safety. Borja Valero is the only injury worry for Fiorentina.

Best Betting Odds and Stats for Cagliari vs Fiorentina

FAQs regarding Cagliari vs Fiorentina game 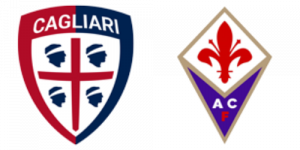 The Sardegna Arena in Cagliari will be the place for this match.

The favourite team to win this match would be Cagliari at a price of 6/4.