Carlisle and Barrow meet in Cumbria on Saturday in England’s League Two. Read our expert predictions and find the latest odds for the fixture below in our match preview.

Carlisle are winless in nine matches in League Two ahead of their clash with Barrow on Saturday. Read our top three predictions for this weekend’s fixture below.

Barrow are on the slide after a run of five games without a win in League Two, though Mark Cooper’s charges have an opportunity to put some more points on the board when they visit struggling Carlisle on Saturday. The Cumbrians have gone nine games without a victory in the fourth tier and with that dismal record considered, bettors are advised to back Barrow in the double chance market.

Carlisle’s rotten run has been accompanied by some dreadful recent performances in the final third – especially at Brunton Park where they have failed to score for three matches on the spin. Barrow meanwhile, have notched just nine times in seven away fixtures this term and with firepower lacking in both camps this weekend, a stake on under 2.5 goals could return dividends.

Barrow currently reside in the lower half of the League Two table, though somewhat remarkably, they have yet to go in behind at half time in an away game this season. Similarly, Carlisle have been trailing at the break just twice in seven home league matches this term and the teams’ shared ability to dig in early doors offers an opportunity to back a draw in the half time result markets on Saturday.

Stopper Magnus Norman and midfielder Josh Dixon could miss out again for Carlisle on Saturday. The relegation candidates find themselves second from bottom in League Two after 15 matches of the new campaign and their run of nine games without a victory in the division suggests a drop down the English football pyramid is possible.

Jamie Devitt, Dimitri Sea, Kgosi Ntlhe and Tom Beadling are all carrying various injuries for Barrow this week. Barrow are winless in their last five League Two fixtures, though successive cup triumphs over Banbury and Leicester City U21's should help to raise confidence levels in their ranks.

Top Betting Odds and Stats for Carlisle vs Barrow 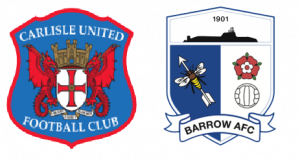 We recommend checking out the odds at NetBet for Carlisle vs Barrow.

Carlisle have been priced as slight favourites to bag three points at Barrow’s expense on Saturday.