Carlisle will host Bristol Rovers in another match from this upcoming round in League Two in England.

Carlisle have had a disappointing season overall but their latest games have been impressive. They have saved themselves from relegation. Bristol Rovers are the other team in the best form but their position in the play-offs remains at risk.

A few weeks ago, we wouldn't even consider betting on goals in a Carlisle match but their recent form has been outstanding. Overall, they were the lowest-scoring team in the league but they actually scored 9 goals in the last five rounds. Bristol Rovers, on the other end, have been one of the most impressive teams in the league lately and we will be shocked not to see them score.

Neither Carlisle or Bristol Rovers have had draws up late but with the incredible form of both teams, we see this as the most possible outcome. Both sides won four of their last five games, which is mostly surprising for Carlisle, which were at the bottom of the league until recently. Overall, Carlisle had seven draws at home this season while Bristol had six on the road.

Carlisle spent the entire season near or in the relegation zone. They won 11 matches this season and five of those wins came in the last six games. Obviously, their form is incredible and almost unbelievable. They have been scoring a lot of goals lately which is also surprising given that they had the weakest attack in the league until recently.

Bristol Rovers had a rough start but the second half of the season has been incredible for them and they deserve to be among the top teams. Their attack has been one of the better ones with 53 goals in 38 fixtures and their defense has improved immensely in recent months.

Top Betting Odds and Stats for Carlisle vs Bristol Rovers

FAQs regarding Carlisle vs Bristol Rovers 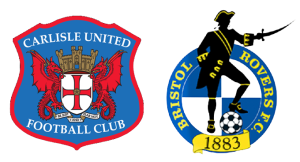 In which places are Carlisle and Bristol Rovers?

Mathematically, Carlisle are not saved yet but there is no doubt that they will remain in the league. They are 18th with 43 points right now. On the other side, Bristol Rovers are currently 4th with 63 points but there are five more teams within three points of them.