Carlisle face Hartlepool for the third time this season in Round 26 of the English League Two. The two teams have low chances of any significant achievements this season but both need the points to increase the distance from the relegation zone.

Earlier this season, Hartlepool managed to win against Carlisle for the first time since 2012. Later on, Carlisle got revenge in the EFL Trophy. Which side will prevail in the third and final fixture of this season?

In most cases, we wouldn't bet on Hartlepool to score in an away game but this is a really old derby that always provides. These teams give their best when they face each other and we expect to see a lot of goals like in the previous two fixtures that occured earlier this season – 2:1 and 3:3. Carlisle are one of the teams that has had the fewest goals overall in games this season but this should change for this particular fixture. We expect this to be one of the most thrilling games of the entire round in the National League.

As mentioned above, Carlisle have always been the more dominant team in head-to-head games. Carlisle and Hartlepool have played 10 games since 2012 and Hartlepool managed to win for the first time in August last year. At the same time, the visitors are the absolute worst away team in the league. Take a note, they have won just 4 points after 12 outings – that is 1 win and 1 draw next to 10 losses. It would be an absolute surprise to see them win even a single point in this fixture and yet, we prefer to go for the safer Draw No Bet option.

We explained why we expect Hartlepool to score but now we have another alternative option at higher odds – exactly 1 goal for the visitors. As mentioned above, Carlisle are one of the best teams for ‘under' bets because they rarely have a lot of goals in their games. For instance, there have been 18 goals in 12 home games this season. We do not expect them to concede more than once – they allowed more than 1 goal in just 3 out of 12 games.

Top Betting Odds and Stats for Carlisle vs Hartlepool

FAQs regarding Carlisle vs Hartlepool 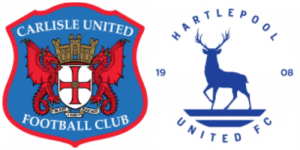 • In which places are Carlisle and Hartlepool?

Both sides reside in the bottom half of the table although they are quite safe from the relegation zone at this point. Carlisle are 20th with 26 points while Hartlepool are 17th with 28 points.

• How many goals have both teams had in their matches to date?

We obviously have two completely different teams and it is visible in their goal differences. Carlisle have scored just 19 goals in 24 games while conceding 30. The visitors have scored 24 and conceded 36 in the same number of matches.

• When will the game start?