Carlisle face Stevenage in the 45th roung in League Two on Saturday.

The season for these two teams is over as both managed to save themselves from relegation in the last few weeks.

These two teams have a lot of history and most of the games between them ended with more than 2.5 goals. Nevertheless, Carlisle are one of those teams that have few goals in their games and we have enough evidence in their recent home games. They had a total of three goals in their last three matches at home.

Carlisle have always performed better in the matches against Stevenage but at this current moment, the visitors are in much better form and will not give in easily. The first fixture between them this season ended in a 0:2 win for Carlisle. In this game, we expect to see a draw as Stevenage have been quite impressive lately and lost a single match in their last five games.

Carlisle are one of several teams that have been fighting for their place in the league throughout most of the season. Their future seemed uncertain until a recent improvement between February and March, which saw them win six out of seven games that created a huge gap between them and the relegation zone. The team has a lot of potential but needs to improve both the attack and the defense.

Stevenage are another one of those teams that have been at risk of getting relegated. They only managed to save themselves in the last few weeks after they had four games in a row without a defeat. The team is stronger offensively than Carlisle but their defense is the 4th worst in the league. After 44 games, their goal difference is 40:64.

Top Betting Odds and Stats for Carlisle vs Stevenage

FAQs regarding Carlisle vs Stevenage 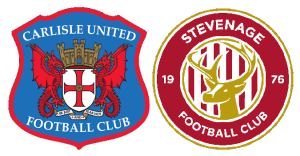 In which places are Carlisle and Stevenage?

Both sides are near the bottom of the table but safe from relegation with two games left. Carlisle are currently 20th with 50 points while Stevenage are 22nd with 44 points.

This match has been scheduled for Carlisle's home ground – Brunton Park.