Carlisle and Sutton go head-to-head for three League Two points on Saturday. Sutton are unbeaten in six games ahead of their trip to Cumbria this weekend. Read our free predictions and find the latest odds for the fixture below in our detailed match preview.

Sutton need a victory at Carlisle to maintain their grip on an automatic promotion spot in League Two. Read our top three predictions for this weekend’s fixture below.

Sutton are right in the mix for what would be a fairy tale top three finish in League Two in their first-ever EFL campaign following their promotion and having claimed 11 points from the last 15 on offer, we’re backing Matt Gray’s charges to enjoy more success this weekend. Carlisle were thumped 3-0 by another promotion contender, Forest Green, in their last outing and they should struggle again against another high-calibre opponent on Saturday.

Fixtures involving Carlisle have been low on action of late and remarkably, eight of their last nine League Two assignments have produced under 2.5 goals. At Brunton Park, 100% of their last nine matches in the division finished with scorelines below the same totals line with the fixtures averaging just 1.11 goals per 90 minutes. We expect that pattern to continue on Saturday so back the net to ripple under 2.5 times again.

Carlisle can be stubborn in defence and despite some underwhelming results, they have conceded just one first half goal in their last four league contests in Cumbria. That record suggests it could take Sutton time to carve open their host’s dogged backline on Saturday and when you consider that six of the visitor’s last eight efforts were registered in the second period, it makes sense to back them to enjoy more joy in the final third after the interval.

Carlisle vs Sutton Match Preview: Sutton can showcase their superiority

Carlisle had put together an impressive five-game unbeaten streak thanks to a favourable run of fixtures, though the Cumbrians returned to earth with a thump at the weekend when they were soundly beaten 3-0 at Forest Green. With six points between them and the drop zone, Carlisle have a decent buffer between themselves and the bottom two, though another defeat on Saturday could drag them back into the mire

Sutton were held to a 0-0 draw at home by fellow automatic promotion candidates Northampton last time out, though United did at least manage to push their unbeaten sequence to seven games in all competitions. It was unusual for Sutton to draw a blank against the Cobblers however – the Yellows are League Two’s third-highest scorers this term behind Forest Green and Newport County.

Top Betting Odds and Stats for Carlisle vs Sutton 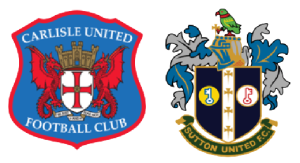 Carlisle are favourites to claim three points at Sutton’s expense on Saturday.

Saturday’s game will be played at Brunton Park in Cumbria.