The Europa Conference League continues with an interesting game between Celtic and Bodo/Glimt. In most cases, the winner of this round would be apparent but Bodo have been the surprise of the season and anything could happen.

Bodo/Glimt shocked the world with their performances in the Group Stage and will now face Celtic, who had a tough time in the Europa League and failed to qualify.

Bodo/Glimt had a very goal-packed group stage and some shocking results like the 6 goals in a single game against Roma. On the other side, 5 out of Celtic's 6 games in the Europa League group stage had more than 3 goals. In fact, most of those games had 4 or 5. We will be shocked to see an under here, especially given that Celtic should be able to score 3 goals even alone against such an opponent. Moreover, we also expect to see at least one goal from Bodo/Glimt too.

We generally believe that this will be the end of Bodo/Glimt's adventure this season. The team will now face an opponent that is at the top of the Scottish league and actually a team that has scored 57 goals in just 26 matches in their league. Bodo/Glimt have been resting, at least from the domestic championship as they became champions of Norway in December. We think that although the team has certainly been training, the absense of games will show in this difficult game. Celtic have been playing a bunch of matches but there is no way that they will underperform here.

Here is an interesting fact – Celtic have serious troubles defending and they often clear out into corners. Most of the teams against them this season took a whole bunch of corners and we expect to see Bodo/Glimt with at least 3-4 minimum in this fixture. Moreover, Celtic will be dominating throughout most of this game and we expect even more corners from them. Almost all of their games in the Europa League had 10-11-12+ corners. Not all corner markets for this fixture are available yet but you can expect some good lines for Bodo/Glimt and if you see something like over 2.5 or over 3.5, it might be a perfect opportunity.

Top Betting Odds and Stats for Celtic vs Bodo/Glimt

FAQs regarding Celtic vs Bodo/Glimt 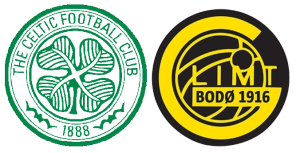 • Which players will miss the game for Celtic?

The hosts have listed four players that will miss the upcoming fixture on Thursday. These are forwards Albian Ajeti, Karakomo Dembele, and Kyogo Furahashi, as well as David Turnbull, who is a midfielder.

• Which players will miss the match for Bodo/Glimt?

One player will miss the game for the visitors – midfielder Sondre Sorli.

• When does the game kick-off?