Cerezo Osaka will face Shimizu S-Pulse in a match from the 18th round in the Japanese elite football league.

Cerezo Osaka have been almost incredible this season despite their defeat in the last round. They will be motivated to win three points against one of the weakest opponents.

When it comes to goals, Cerezo Osaka and Shimizu are two of the teams that have had the most goals in their games this season. Both teams participate in goal-packed games on a weekly basis and we expect to see one more of these games. The teams played once this season already and we had an incredible game that ended in a 1:3 win for Cerezo Osaka. The hosts are in great form, so we expect to see them score multiple goals again.

Few teams in Japan have the current form of Cerezo Osaka – the hosts in this match have seven wins in the last eight matches in all tournaments, including 4 in the championship. The team has also scored at least 2 goals in 6 out of those 8 recent games. On the other side, Shimizu S-Pulse have been one of the weakest teams in the league for multiple seasons in a row now and their performances this year have been terrible overall.

When it comes to corners, Cerezo Osaka and Shimizu S-Pulse have similar stats. Both sides have had around 9.0 corners on average in their games, so we can expect to see a few from both teams. Nevertheless, Shimizu S-Pulse are one of the teams that take the fewest corners individually in the league – just an average of 3.8 per game. We think that Cerezo will be the team that dominates in this match and Shimizu will not have many chances to do anything.

Cerezo Osaka are one of the most improved teams in the league after they finished 12th last season and with a negative goal difference. They have been one of the best teams in the new season and a serious contender for the Top 3 positions right now. Of course, the season is young still but Cerezo Osaka have shown that they have one of the best attacks in the league. As long as they can improve their defensive efforts a little bit, they will remain a contender.

Shimizu S-Pulse have been struggling for years and now that all the weaker teams got relegated last year, they remained as one of the weakest teams in the new season. They are one of the teams with the fewest wins since the start of the campaign and have the 2nd weakest defense with 25 conceded goals in 17 fixtures. Shimizu's attack is not that bad, however, and with some improvements we might see them survive the season. 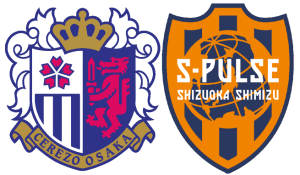 This fixture has been scheduled for Cerezo Osaka's home ground – the Yodoko Sakura Stadium.

Cerezo Osaka and Shimizu S-Pulse are on the opposite ends of the table. The hosts are now 6th with 26 points while Shimizu are 16th with 16 points.