With two rounds remaining until the end of the season, the final standings of all teams are almost certain. Nagoya Grampus remain one of the few teams in the league that still have something to fight for.

Cezero Osaka are set to finish in the middle of the table. Nagoya Grampus, on the other hand, need at least one more win to secure 4th place, which guarantees participation in the AFC Champions League qualifications.

Betting on the away team to win is not something we would typically recommend in the J1 League. This is a league in which most teams can beat most teams and in most cases, the away win is not the safest option. In this particular case, we have a team with nothing to play for and Nagoya Grampus, who need the three points at all costs. We expect them to get the win here as the team has been quite successful in recent weeks and has lost just 1 match. On the other side, Cezero Osaka lost 3/5 of their most recent matches. We expect a difficult win here for Nagoya Grampus, who already won twice against this opponent throughout the season.

For the same reason mentioned above, we choose the team total goals market. Nagoya Grampus will be on the offense here and will look for the goal from the first to the last minute. We expect them to score at least two in this case, which, in most cases, would secure them the win. They have not been the best away team in the league and definitely not one of the highest-scoring ones but this match is of greater importance than any to date. We expect them to score twice even if they do not win. 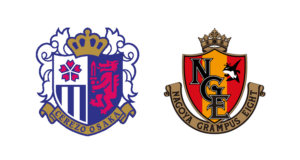 • In which places are Cezero Osaka and Nagoya Grampus?

Cezero Osaka will end in the middle of the table – the team is currently 11th with 45 points and even with two wins, they will not progress with more than 1 or 2 places. Nagoya Grampus are currently 4th with 65 points and need the win to secure this position.

This fixture has been scheduled for 5:00 AM UTC on Saturday, November 27.

This fixture will be played in Cezero Osaka's home ground – Yanmar Stadium Nagai, which has a capacity for 47,816 spectators.