Off the back of two consecutive draws, Chesterfield hosts their next league engagement against Maidenhead. The Magpies come into this game after successive defeats.

Maidenhead are winless from the last four games, getting three defeats. The Magpies have also managed only one victory in the last five away outings, along with three defeats and one draw. But Chesterfield are unbeaten from the previous four games, winning two of them. The Spireites are also yet to lose in the last three home games and recorded two winnings in those games. Maidenhead has surprising results against their upcoming rivals with consecutive wins and remaining undefeated. But we expect the home advantage this time for the hosts to change the trend and secure the points.

Chesterfield has been able to add seven goals in their record in the last four attempts but the Magpies’ front line is lagging in their recent games, missing the target consecutively. The visitors have scored only five goals in the previous five away outings. Three of the last five H2Hs’ totals have also been below 2.5 goals and we would be expecting the same in this game.

The hosts are scoring from the last four matches consistently and have missed the chance only once in their all recent games. But Maidenheim are falling behind badly in this regard, failing to score in any of the last four outings. Chesterfield has also been able to hold a strong defence that leaked only three goals in the previous three home games, getting one clean sheet as well. Most of the teams' H2Hs witnessed BTTS outcomes but given the current stats of visitors, we expect only the home side on the scoreboard at the end.

The Spireites dropped two points again in their last game against Boreham Wood, equalizing the lead in the 88th minute. Chesterfield are second in the points table but two draws in a row may suffer the team in the standing as they have played two more games and have the difference of only two points from third. Kabongo Tashimange will miss out on this game due to injury.

The Magpies were good enough to restrict the rivals to 0-0 till ninety minutes but leaked the goals in the added time and got their consecutive second defeat against Woking. After managing only nine wins and eight draws, Maidenhead are at the nineteenth position with points. The club manager Alan Devonshire owns a completely healthy squad available for his game.

Top Betting Odds and Stats for Chesterfield vs Maidenhead

FAQs regarding Chesterfield vs Maidenhead Coverage and Accessibility 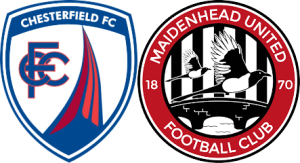 Where is the game being played? Technique Stadium (Chesterfield).

Who are the bookmakers' favourite to win? Chesterfield.