Following victory in their last away game, Wrexham makes another visit for their next game against Chesterfield on Wednesday, 23 February. The Spireites enter the field after a defeat and will want to get back to winning ways and resume their title assault.

Chesterfield are still to get a win from the last three games, losing one out of those. while their visitors, Wrexham have made the consecutive second victory before this game. Wrexham have won three of the last five games of all competitions. But the Dragons are still winless from the last four games against Chesterfield, losing two. adding more, the Spireites have won the previous two H2Hs at their home and have an advantage again. So we pick the hosts to take the victory again in this game.

Despite not getting the perfect results, Chesterfield has produced seven goals in the last four outings. The Spireites scored twice in each of the last two home games. Wrexham have also scored five goals in their recent four matches. So we expect the teams to collect a total of at least three goals in this game.

Regardless of the recent results, Chesterfield has been able to score in all of the previous games while the visitors missed the chance only once in the last five games. Wrexham also has scored in four of the recent five H2Hs against the Spireites. There is no clean sheet in the recent four games of both teams. Based on the given stats, we can expect both teams to score at the same time.

After playing two consecutive draws, Chesterfield lost their last game against Solihull Moors. But the teams still stand at the second position with the difference of six points and one game in hand. However, the Spireites need improvements in their defensive touch that have conceded five goals in the last three outings. Two players from the squad are on suspension while Kabongo Tshimange is injured ahead of this game.

The Dragons have made their third away win out of the last five away attempts. The away games of this season have proved beneficial for Wrexham as they won five of the last seven outings. With two matches in hand, Wrexham stands at the seventh position with 49 points. The club manager Phil Parkinson owns a completely healthy squad for the coming game.

Top Betting Odds and Stats for Chesterfield vs Wrexham

FAQs regarding Chesterfield vs Wrexham Coverage and Accessibility 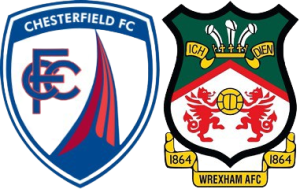 Who is the bookmakers' favourite to win? Chesterfield.

Who won the last Head to Head fixture? Chesterfield and Wrexham played a 1-1 draw.