Shanghai Shenhua should have been in the Championship Group and even there, they wouldn't have been the worst team. In each case, they are levels above the entire Relegation Group and playing this second stage felt like a waste of time for the team. With two games left, the season is almost over but first – a match against Chongqing Liangjiang.

Chongqing Liangjiang are one of the teams that still might get relegated if they do not win more points in the remaining two games. The team is slightly above the relegation zone and a match against the best team definitely is not a great option but they will have to do their best to get something out of this match.

Shanghai Shenhua and Chongqing Liangjiang played against each other about two weeks ago and the game ended in Shanghai's biggest win since the restart – a 4:1 win. While we do not expect to see the same thing in this second and last fixture between them, we do not expect to see Chongqing score in this game. They have been one of the worst-performing teams since the campaign started and they scored just 3 goals in their 6 games to date. If Shanghai want to keep their net clean, they can do it without much trouble.

There is a huge difference between these teams and we know that Shanghai will not let their fans down with a poor performance because of the end of the season. The team has shown us that they want to win despite the fact that there is no true purpose for those games. Of course, we wouldn't dare bet on the clean win here for Shanghai as their opponents will be far more motivated for the three points but still, we recommend the double chance option which comes with great odds.

Once again, we pick a line against the home team – Chongqing Liangjiang shouldn't score two goals in this fixture. In the first tip above, we described that we do not actually expect them to score at all but that is in the case that Shangai perform at their usual level. In each case, under 1.5 should be one of the safest markets for the entire round in the Super League. Shanghai have conceded just 14 goals in 10 away games this season, which includes the earlier matches from the regular season against the top teams in the league. 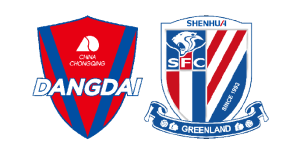 • In which places are Chongqing Liangjiang and Shanghai Shenhua?