After being dumped out of the Romanian Cup, CFR Cluj returned to winning ways with a hard-fought victory over UTA Arad. They now turn their attention towards the UEFA Europa Conference League where Danish Superliga outfit, Randers, are ready to take them head-on.

With three defeats in five competitive fixtures, Cluj continues to struggle in the 2021/22 campaign. They are not in the best shape to make their mark but should make their home advantage count against the less travelled Randers. The Danes arrive on the back of an uninspiring away defeat to Midtjylland and a similar result awaits them in this meeting.

Three of the last four fixtures involving Randers have concluded with Over 2.5 total goals. This has its roots in the Horses conceding seven goals in this period. Thomas Thomasberg will be more cautious in their Conference League outing and we should expect similar tactics from Dan Petrescu on the Cluj bench. The Romanians have been dumped to the third tier and will need to give a better account of their abilities following their 1-0 defeat to Jablonec.

Midtjylland shut out Randers in their last competitive fixture and we are predicting the Horses faithful to go through a similar heartache this time around. Cluj has been involved in low-scoring affairs where only one side has hit the back of the net. Score first and the Romanians will be doomed, and concede first and they will hold on for the victory. The last six fixtures have seen this pattern and we expect it to repeat as the two sides meet on Thursday evening.

The Railwaymen were crowned Romanian champions in May, earning a shot at UEFA Champions League qualification. That plan has gone south since it was conceived and Cluj currently finds itself battling in the Europa Conference League. While they have maintained their grip on the domestic front, their defeat to Jablonec will continue to haunt them. Given the margin of their continental defeats, all fingers point towards the profligacy of their attacking group and they need to start delivering to avoid a fans revolt.

Thomas Thomasberg must have applauded his charges for standing up to AZ Alkmaar and holding them to a 2-2 draw at home. Randers are on the road for their next fixture and will be cautious of Cluj despite the Romanians poor continental form. With just three wins from their last ten competitive outings, they will be wary of their inability to close out games. However, the sprightly goal return from Stephen Odey must have inspired confidence. The Nigerian has scored five goals in six outings and will be looking to add to his tally.

Top Betting Odds and Stats for Cluj vs Randers

FAQs regarding Cluj vs Randers Coverage and Accessibility 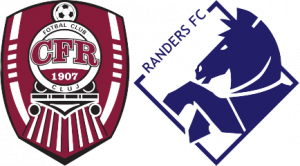