This preview looks at strugglers Colchester’s attempts to pick up the first win of the season when they go up against Mansfield at the JobServe Community Stadium in the midweek action.

Colchester suffered a 1-0 defeat against Northampton Town as the team were quite wasteful going forward. Mansfield registered back-to-back wins in the league after beating Newport County 2-1 at home.

Mansfield to win the game

Mansfield have played some excellent football in this early part of the campaign. The back-to-back wins have put the team in a very strong position, while Colchester look completely out of shape. The number of missed opportunities for Colchester in the recent loss against Northampton Town will especially make them feel quite bad. Even the overall head-to-head meetings between Colchester and Mansfield have been very close, this game should go in favour of the visitors who are aiming for a third consecutive league win.

The defensive performances from Mansfield have been excellent in recent matches. Even if Colchester, who are yet to score in the campaign, managed to get off the mark, the biggest contribution is likely to come from Mansfield, who have four goals in the last two league matches. Crucially, all of the games involving Mansfield have produced over 2.5 goals this season and it is the same case with recent head-to-head meetings between Colchester and Mansfield.

Hayden Mullins has watched his team come up with some attacking performances. Even after having many chances against Northampton, Colchester were unable to put them away. The offence is going through a low-confidence period and it is best to expect a lower return of goals.

Colchester are yet to get off the mark this season by scoring goals in any competition so far. It is not a surprise that the team finds itself searching for the first win of the season. One of the few positives for Colchester ahead of this game would be the presence of a fully fit squad.

The first few rounds of action will please Nigel Clough, who has a lot of expectations on his shoulders. Mansfield have produced good football leading up to this game and they also have a fully fit squad at their disposal.

Top Betting Odds and Stats for Colchester vs Mansfield

FAQs regarding Colchester vs Mansfield Coverage 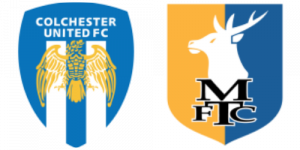 JobServe Community Stadium will be the location for this game.

Mansfield are rated as the favourites to win this match.