This Friday up against each other we have Colchester and Newport in a League Two battle for valuable 3 points.

The information following this paragraph will provide you with key insight into the upcoming game. For more expert League Two picks, please visit our dedicated page.

In the last 10 games between the two teams, two resulted in draws, Colchester United won 5, and Newport County won 3. The truth is the two clubs are very even and it will be difficult for either one of them to dominate over the opponents. Colchester United does have a bit higher-valued players in the squad and will be counting on the support of the fans but Newport County currently has the momentum going for them as they are ranked 6th in League two with no losses in the last 5 games.

Regardless of who the favorite to win the game might be, the truth is the clubs rarely enter a high-goal scoring game. In the last 10 games, 6 resulted in Under 2.5 goals, and 2 only narrowly beat that margin with a 2:1 result for either side. Newport County has a lot to lose here as they can’t afford to go recklessly into attacks. The away team has to protect the 6th position and will enter this game in a defensive manner.

Yet another tradition that is highly likely to be kept. In the last 10 games, 6 ended with no goals being scored from one of the team and in the other 4, one of the team scored only 1 goal. Very likely for this prediction to be a success. Even more so when you look at the last 5 games for the clubs. Newport had 3 out of 5 games where one team didn’t score a goal and Colchester had 3 as well.

Colchester vs Newport: Best odds and most important stats

And here are the key Colchester vs Newport statistics and suggestions:

The two teams will continue their rivalry in an orderly fashion. They know each other, the strengths and weaknesses aren’t going to surprise either one. It will be a tactical game and waiting for the right time to strike as always. A narrow win for either side could be the case but the most likely outcome according to our football experts is a draw.

Common questions for the Colchester vs Newport game: 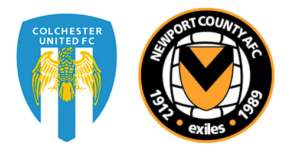