Colombe FC hosts Fauve Azur de Yaounde on 14th June in Round 25 of Cameroon Elite One league. This post features a comprehensive preview of this match, so keep reading to find out how we have predicted the match and also place a bet on the best odds for the duel.

Elite One football predictions by Football Ground Guide are premised on research, in-depth analysis and the latest match stats/information. Our best three picks for this match are:

The second duel between Colombe and Fauve Azur is expected to be a highly contest match. The last encounter was equally a difficult match as one goal was scored in that encounter. We have the best tips for this game as follows:

Our first pick in this game backs home team to open the scoring. The hosts scored in all their last 6 matches. They were particularly lethal in the last two outings where they scored a total of 9 goals with a 5-nil home victory over Apejes de Mfou the last time out underscoring their preparedness ahead of this game. On the other hand, Fauve Azur has been struggling to score. The visitors have been particularly weak defensively, losing two of their last six. They leaked at least 3 goals in those losses.

Colombe to win the game

We expect a lot of goals in this game. It is sharp contrast between a team that is struggling away from home and one that has a great home run. Moreover, defensive mishaps have seen the visitors win just one match on the road. Also, noting that there were at least three goals in three of the last five matches on both sides, this is likely to be a high scoring duel.

Colombe vs Fauve Azur Elite One, Group A Match Preview

For more information, stats and team news, read the team previews below.

Colombe FC look to continue their fine home run at home in the second encounter with Fauve Azur. The hosts have been in fine scoring form as well, so this game should not be difficult, taking into account expected home support. The least we expect from the hosts is a draw but they are in a better position to win it.

Azur Fauve looks to defend a narrow 1-0 victory against Colombe FC in May this year. The visitors, however, must worry about their wanting away performance. With just one win and 6 points in 9 trips, this will be an uphill task for the visitors.

Find out how these teams have fared in their latest assignments and also place your bet on the best odds in the tables below. 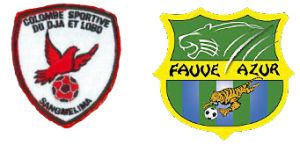 How many times have these teams met?

There has been only one meeting between the teams.

What time will the match begin?

Which team has a better scoring record so far?

Colombe FC has scored 32 goals while Fauve Azur has found the net 31 times so far.