Como face Brescia in the first match of the 26th round in Serie B on Saturday. Como have to bounce back from a terrible 5:0 loss in the previous round while Brescia have a chance to increase the gap between them and the next contenders for the championship.

Brescia have proven that their ambitions to reach the elite are serious and the team will try to win the Serie B title. Como's chances to reach the promotion zone are not particularly big but we saw several impressive improvements in several teams, so there is always a chance.

There are few matchups in Serie B that are perfect for goal-related bets and Como vs Brescia is one of them. See the previous head-to-head game – it ended in a 2:4 win for Como although Brescia have generally been the much stronger team. Although there have not been any other recent h2h games, back in the day, these teams had some incredible games and all had loads of goals. Since Brescia became one of the strongest teams, they have been conceding less goals than usual but Como's games have been having a bunch in recent weeks and we expect to see 3-4 goals here. Almost all of Como's recent games ended with both teams scorin.

Brescia will try to take revenge for that devastating loss to Como in the early stages of the season. We also think that their chances are much bigger based on their performances this season. For instance, Brescia are the strongest away team in the entire league. The visitors won 9 out of their 12 fixtures on the road this season and had just a single loss. Como are not particularly strong but they have had predominantly positive results at home. Nevertheless, we think that there is a difference in class here and Brescia are on a nine-game strak without losses.

Top Betting Odds and Stats for Como vs Brescia

FAQs regarding Como vs Brescia 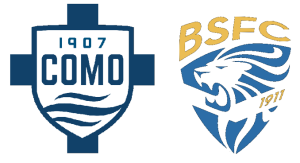 • In which places are Como and Brescia?

The promotion race this season has been incredible. There are eight teams currently that are within 6 points of each other in the promotion zone and Brescia are the leaders with 47. Como are right in the middle of the table with 34 points at 11th place.

This fixture will take place at Como's home ground – Stadio Giuseppe Sinigaglia, which has a capacity for 13,602 spectators.

This match has been scheduled for 13:00 UTC on Saturday, February 26.