Como takes on the visiting Vicenza in the next engagement of the Serie B on Monday, 25 April. The teams will be keen to add points as both sides are on a sequence of winless league games.

Como has got a streak of three consecutive defeats ahead of this game while Vicenza are also winless from the last four games. However, Lariani has a mix of results on their home ground with two wins and two draws in the last six attempts. On the other hand, the White and Reds have a horrific run of successive four away defeats, winning zero in the previous nine visits. Adding more, Como are also undefeated in the last five H2Hs against Vicenza and won three in that course. So we see Lariani once again with the lead in their home advantage.

Vicenza has found the target only once in the last five away outings while scoring only two in the previous five visiting H2Hs against Como. All of the last five H2H meetings at Lariani’s home didn’t cross a total of over 2.5 goals. Como has scored eight goals in the last five games but we don’t think the teams will be able to share a high total and are likely to follow the previous trend.

Regardless of the consecutive defeats of the recent games, Como hit the target in all of the last five outings. The hosts have also been on the scoring end in all of the last five duels against Vicenza. But the White and Reds were unsucceeded in scoring in three of those games. Vicenza has also scored zero goals in the previous three away attempts. For these reasons, we don’t expect a BTTS outcome for this game.

The Lariani equalised the lead in the second half but couldn’t defend more and lost 3-1 at the end against Pisa, getting their consecutive second away defeat. Securing only 10 wins and 14 draws, Como are at the fourteenth position of the points table. Moutir Chajia will not be available for this game due to having patella problems.

The White and Reds played two undefeated home games in the recent attempts but failed again in the last attempt and lost 1-2 against Perugia. Vicenza has lost 22 games out of the 35 league matches that sent them to the eighteenth position of the table. The club manager Francesco Baldini has three players out of the selection due to injuries and suspensions.

Top Betting Odds and Stats for Como vs Vicenza

FAQs regarding Como vs Vicenza Coverage and Accessibility 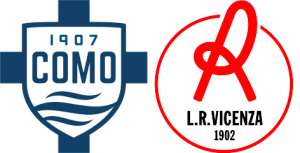 Where is the game being televised? DAZN Italia, Nova Sport (Bul).

Who won the last Head to Head fixture? Como won with a 0-1 scoreline.