Cosenza will face Cittadella in their final fixture from this season and this will be their most important match of the year.

Cosenza are currently in the play-in zone and unless they win this last game, they might fall behind and get relegated directly.

Cosenza and Cittadella are two of the lowest-scoring teams in the league and they rarely score more than one goal. Quite often, they do not scor goals at all. However, these two teams have a lot of history between them and we cannot ignore their past meetings. All five of the most recent games between them ended with both teams scoring goals.

Cosenza are the weaker team out of these two and they are far from the best hosts in the league. Nevertheless, they need the three points here or at least a draw and some luck and they will give their best in this match. Cittadella are one of the teams with the most draws on the road this season – a total of 8 in 18 outings.

Cittadella take a considerable number of corners per game compared to the league average. Nevertheless, they have nothing to fight for in this match and we do not expect too much effort. Cosenza are one of the teams with the fewest corners this season and overall, they took 3.60 corners per game in their last five home games.

Cosenza have been near the bottom of the table since the start of the campaign and only started improving in the last couple of months. Unfortunately, it was not enough to get them out of the relegation zone but the team has one final chance to get to those play-in spots that give one last chance for survival. Their goal difference after 37 games is 35:59.

Cittadella had much bigger ambitions for this season but a few bad performances earlier this year put them behind the promotion zone. Now, their chances are gone and they will end the season right beneath the playoffs. The team has a solid defense but one of the weakest attacks in the league – their goal difference after 37 games is just 38:35.

Top Betting Odds and Stats for Cosenza vs Cittadella

FAQs regarding Cosenza vs Cittadella 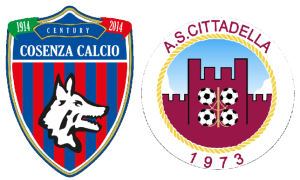 In which places are Cosenza and Cittadella right now?

Cosenza will end the season in the relegation zone – the question is whether they will get relegated automatically. Right now, they are 17th with 32 points. On the other side, Cittadella are in the middle of the table – they are 11th with 52 points.

This fixture has been scheduled for Cosenza's home ground – Stadio San Vito.