Two of the most interesting teams in League Two face each other in a match from the 32nd Round – Crawley vs Hartlepool. These are completely different teams and this game might just be equally as predecided as completely unexpected.

We think that we will see a game that ends in either 1:0 or 0:0. Hartlepool's away performances speak for themselves. The team is the second-lowest scoring side in the league with only 8 goals in 14 fixtures. They managed to score a goal in just one of their last 5 away games, and while some of which were against promotion contenders, we think that this game will not be much different. Crawley have also been in quite a good form recently, although this mostly applies to their performances at home. We expect a low-scoring game in favor of Crawley.

We have all the confidence that Crawley will win this match but how do you bet on a home win when the home team has won a single game since September. This is a team that outdoes itself on the road but at home – below average. At the same time, Hartlepool are the absolute worst away team – they won just 1 of 14 away games to date and also reached a draw in just 3. This performance is outstandingly bad and completely unexplainable. For this reason, we go with the win or draw option here with the Draw No Bet, which will return our money if Crawley fail us again at home.

We think that there will not be a lot of action in this game and Crawley and Hartlepool will not take more than 10 corners. In fact, we expect to see a much lower number like 7-8. The hosts have taken just 3.79 corners per game this season, one of the lowest stats in the league. On the other side, Hartlepool took more – 4.36 corners per game but most came in home games. On the road, the visitors have been taking just 3.86 corners on average.

Top Betting Odds and Stats for Crawley vs Hartlepool

FAQs regarding Crawley vs Hartlepool 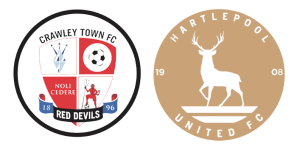 • In which places are Crawley and Hartlepool?

Both sides lost a lot of games that could have been won and thus, remain in the middle of the table instead of the higher positions. Crawley are 12th with 40 points currently while Hartlepool gained some positions and are 15th currently with 34.

This match will be played at Crawley's home ground which bears a curious name – The People’s Pension Stadium, which has a capacity for 6,134 spectators.