Crawley will face Leyton Orient in another fixture from the 45th round in League Two on Saturday.

The season for these two teams is over but that does not mean that they will not treat as with a wonderful match.

Crawley are one of the teams that have had the most goals this season but now, they are facing Leyton Orient, which are quite the opposite type. Out of 44 games to date, Leyton Orient had just 17 games with over 2.5 goals and out of 22 outings – only 7 with more than 2.5 goals. We should also mention that Crawley had three games in a row at home with just a single goal in them.

Leyton Orient showed huge improvement lately after a terrible mid-season streak of defeats. Nevertheless, they have not been as consistent on the road and have been winning and losing games. Crawley, on the other hand, have been quite impressive at home and are coming into this match with three consecutive 1:0 victories in front of their own crowd. These teams are absolutely equal but we think that Crawley will prevail.

The first match between these two teams from earlier in the season ended with just 6 corners at full time. Since neither of these teams has impressive corner stats, we are once again going for the under here. Overall, Crawley took an average of 4.40 corners per game in their last five games while Leyton Orient took even less – 4.00 corners per game in their last five.

Crawley had their good and bad periods this season. The team has a surprisingly good offense but their defense has been lacking. We see a lot of potential in this team as long as they improve defensively. After 44 games this campaign, their goal difference is 53:61, which is actually the only negative goal difference out of the entire upper half of the table.

Leyton Orient have had the most extraordinary season ever. They started as an average team, then went through the worst possible series of 16 consecutive games without a win. And then, the last three months have been the exact opposite – the team won most of its games and did not concede goals in a huge number of games. Their goal difference is quite shocking even after 16 games without a win – 60:46.

Top Betting Odds and Stats for Crawley vs Leyton Orient

FAQs regarding Crawley vs Leyton Orient 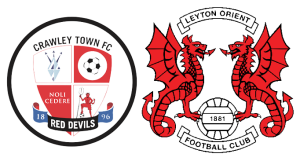 This fixture has been scheduled for Crawley's home ground – The People’s Pension Stadium.