Crawley and Rochdale will play against each other in another fixture from the 39th round.

Rochdale have had a disappointing season but there is no doubt that they will remain in the league at the end. Crawley still have mathematical chances to reach the play-offs but they need to win all remaining games, which is impossible.

These teams have not been among the top-scoring nor have they been impressive at any stage of the season but we expect to see goals here. The first game between them ended in a 0:1 win for Crawley but overall, they have been having a bunch of goals in their games of late. Crawley had four games with over 2.5 goals in their last five home games while Rochdale had 4 overs in their last five away games.

Both sides are in bad shape but Crawley have generally been getting good results in front of their own crowd. For instance, they lost just a single game at home in their last five games. They had two draws and two wins too. Rochdale have been one of the weakest away teams in the league with nine losses in 19 rounds. We aren't completely certain about the home team win, so we prefer the safer draw no bet option.

Crawley and Rochdale have not been among the teams with the greatest corner stats but they take a considerable number per game. Overall, Crawley have taken an average of 4.19 corners per game in their games this season while Rochdale, despite their weak results, took an average of 5.86 corners in their games to date.

Crawley have been an average team throughout the entire season with 13 wins, 9 draws, and 15 defeats. They have scored a considerable number of goals – not a lot but not few compared to half of the league – their goal difference is 47:53. Their form has not been good but they are quite good at home.

Rochdale have had one problem this season – their defense concedes a lot more than their attack scores. They have struggled to win their games and have the most draws out of the entire league – 16 in 37 rounds. They need some more points to secure their place for good but we can generally say that they will be in League Two next year too.

Top Betting Odds and Stats for Crawley vs Rochdale

FAQs regarding Crawley vs Rochdale 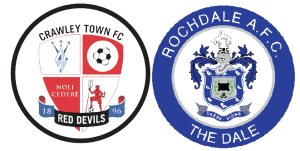 In which places are Crawley and Rochdale?

Both sides are in the bottom half of the table but Crawley's position is significantly better. The hosts are 13th with 48 points while Rochdale are near the bottom at 19th with 40 points.