Crawley take on Scunthorpe in a match from the 35th round of League Two on Saturday.

Scunthorpe are facing relegation while Crawley should be quite motivated to get even closer to the play-off zone after a series of positive results that put them in the upper half of the table.

This is a perfect game for over 2.5 for more than one or two reasons. First of all, Crawley and Scunthorpe have played a bunch of games against each other in recent years and almost all of them had an impressive number of goals. For instance, eight of the last 10 fixtures had more than 2.5 goals. At the same time, seven of the last 9 had both teams scoring at least one goal. At the same time, Crawley have been quite impressive in recent weeks and had more than 2.5 goals in four of their last five games. With Scunthorpe being the weakest team with the weakest defense, we can expect Crawley to score three goals alone here.

The favorite here is obvious and we believe that there will be no surprises here. Scunthorpe have not won a match since their surprising win a few weeks ago and overall, the team has been the worst in the league for a long time. Crawley have not been the most impressive team overall but they somehow manage to get positive results even with conceding goals in every fixture. Especially with their current improved form, we think that they will want to take revenge for that surprising defeat in the earlier stages and get closer to the promotion zone. There will not be an easier game for them until the end of the season.

We expect to see a bunch of corners for Crawley and at least a few from Scunthorpe on Saturday. As the weakest team, Scunthorpe have not taken a great deal this season and their recent results have definitely not been impressive – just 3.20 corners per game on average. On the other side, however, Crawley have been taking an impressive number of corners – 6.20 per game in their last five fixtures. We generally expect to see 6 or 7 from them as a start and we expect 2-3 from the visitors as well.

Top Betting Odds and Stats for Crawley vs Scunthorpe

FAQs regarding Crawley vs Scunthorpe 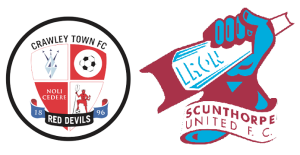 • In which places are Crawley and Scunthorpe?

Obviously, Scunthorpe are last in the table and their chances for survival are getting slimmer and slimmer with each round. Crawley, on the other hand, are now 12th with 44 points, which is nine below the play-off zone.