Cremonese face Ascoli in the 37th round in Serie B on Saturday.

Cremonese are fighting for the championship while Ascoli need one more win or at least two draws in the remaining games to secure their playoff spot.

Cremonese are one of the teams that have had the most goals out of the entire league this season. More importantly, they also concede a lot of goals besides scoring. Ascoli are one of the best teams in the league but they have some issues in attack. What's important is that Cremonese allow goals in most games – they conceded at least one in eight out of 10 home games in the league.

Cremonese are one of th three teams with a single defeat at home this season. Overall, they are considered the third-best home team statistically. They haven't lost at home in over 15 games and won 8 out of their last 10 fixtures. Ascoli have been having some issues on the road and lost four out of their last six games as visitors. We think that Cremonese will have no issues here after they beat this opponent with 1:4 earlier this season.

Cremonese need the three points here or the season will be over for them. Due to their two most recent defeats, they are now a couple of points behind the leaders and main competitors for the championship. With two matches left, they need all six points to even have a chance at the end. The team has been great this season and already exceeded even the highest expectations.

Ascoli have been another one of the main contenders since the start of the season but their high number of defeats played its role. The team is almost certainly reaching the playoffs but they will have a difficult task with multiple games against top opponents. The win here is not mandatory for them but it would seal their playoff spot for them.

Top Betting Odds and Stats for Cremonese vs Ascoli

FAQs regarding Cremonese vs Ascoli 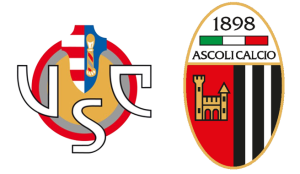 In which places are Cremonese and Ascoli?

Cremonese and Ascoli are quite close to each other near the top of the table. Right now, with two games left, Cremonese are 2nd with 66 points while Ascoli are 7th with 59 points.

This fixture has been scheduled for Cremonese's home ground – Stadio Giovanni Zini.