Cremonese face Brescia in one of the most important fixtures of the season for both teams. Both sides have an equal chance to take the three points here, so this game could be completely unexpected.

Cremonese and Brescia have been extraordinary in recent months and deservedly take two of the top three positions in the league. Now, these incredible sides will clash for the top.

What we expect from this game is a serious battle that will either have an unbelievable number of goals or almost none. We settled for the second option as this game is too important for both teams to see them risk conceding goals. Moreover, eight of Brescia's last ten games had less than 2.5 goals. The stats are similar for Cremonese but they had a couple of more games with three or more goals. Overall, the previous match between them ended in a 1:0 win for Brescia and we think that we will either see this or a draw with under 2.5 goals.

There is nothing else that you could expect from this fixture. Both sides have been outstanding in recent months. For example, Cremonese have not lost in seven consecutive games. On the other side, Brescia's results have been even more impressive – the team has not lost in eleven consecutive games. The last two meetings between them at Cremonese also ended in draws. These teams have absolutely identical stats interms of goals scored, goals conceded, and win/draw/loss (1 defeat difference). We think that neither side wants to lose here and we will see both teams play their best football to date.

There is perhaps no better fixture in this round of Serie B than this one if it comes to corners. The stats of these two teams are simply too good. For example, Cremonese took an average of 5.80 corners in their last five games with is already impressive. But look at Brescia – the team took an average of 8.20 corners in its last five games, which is simply unbelievable. We believe that we will see a lot of corners in this game and few goals.

Top Betting Odds and Stats for Cremonese vs Brescia

FAQs regarding Cremonese vs Brescia 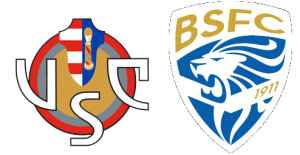 • In which places are Bresica and Cremonese?

Brescia and Cremonese are sitting next to each other in the table with one point between them. The hosts are currently 3rd with 50 points while Brescia are 2nd with 51 points. The current leaders from Lecce are with 52 points, so you understand how crucial this game is for all teams at the top.