Round 35 of Serie B brings together Cremonese and Cosenza at the Stadio Giovanni Zini. While the hosts are fighting for the league title, the visiting Wolves are battling for survival in the Italian second division.

Cosenza gave themselves a fighting chance with a win against title contenders Benevento. Cremonese will have learnt from the Sorcerers' mistake and will not take the Wolves lightly. Their promotion chances depend on it with just four matches remaining until the end of the season. The Tigers won on the road in the reverse leg and should have enough in the tank to add the three points on offer to sustain their Serie B title assault.

Cremonese took the lead against Frosinone but could not hold to it. They would have learnt from their mistake and will look to keep Cosenza in their own half. This will play into the Wolves' strategy, who weathered the storm against Benevento before punishing them on the counter. As they travel on the road, they will be more cautious about keeping the affairs low. With both sides at crunch moments of the season, expect a low scoring affair that is decided by fine margins.

Given the form Cosenza is in, it is difficult to rely on them for scoring. Cremonese will like their chances given their tally of 8 scored and only 5 conceded in their last five outings. Take out their 2-1 loss from this tally, and their statistics have an even better viewing. They won the reverse leg with a 0-2 scoreline and we expect a similar reading in their favour this time around.

Frosinone threw a spanner in Cremonese's work in Round 33 and the Tigers will want to rectify their mistake. They are locked in a four-team battle for the Serie B title and anything but perfection will cost them their chance at silverware. Fabio Pecchia will have grilled extra steadfastness in his charges this time around and will want to build on their three-match winning run against the Wolves. It is easier said than done as their rivals dealt a blow to fellow contenders Benevento's chances in their last outing.

Victory over Benevento allowed Cosenza to dream about survival. It was their first in nine matches and will want to improve against title contenders Cremonese. They will not have the comforts of Stadio San Vito at their disposal and have odds stacked against them. Moreover, as recent history suggests, their encounters with the Tigers have not gone their way. With their back to the wall, they need to fight for survival or look at the unknown realms of Serie C.

Top Betting Odds and Stats for Cremonese vs Cosenza

FAQs regarding Cremonese vs Cosenza Coverage and Accessibility 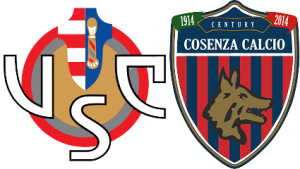 Where is the game being played? Stadio Giovanni Zini (Cremona).