This preview takes a closer look at the Group H game between Croatia and Cyprus at the Stadion HNK Rijeka.

These are some of the top betting tips for the game between Croatia, who made a disappointing start to the World Cup qualification group stages, and Cyprus.

Croatia win and both teams to score – no

Cyprus step into the game after having scored just twice in the last five games. They are up against a Croatian outfit struggling for form. However, the hosts will have a huge leap in terms of quality thanks to the presence of players like Luka Modric, Ivan Perisic, and Kramaric. Even though recent results have not been great for the hosts, Croatia are expected to get the first win of the campaign.

The game against Slovenia saw Croatia dominate the ball and create many chances. If the team is able to come up with a similar performance against Cyprus, this match stands to witness plenty of goals. There may not be a contribution from Cyprus to the goal tally, but a big win is not too far ahead.

Croatia win at half-time and full-time

Croatia might be a team in a lot of bother following a winless run that now stretches to five matches. However, a game against minnows Cyprus gives a great opportunity to overcome the bad start to the qualification group. Cyprus did well to get a point out of their opening game, but Croatia’s quality will shine through.

Croatia are in bad need of a victory to boost morale, which has been affected owing to a winless run that hit five matches following the loss against Slovenia. This is one of the worst runs Zlatko Dalic has overseen since taking over as the coach in 2017. Croatia need to make the most of the home games against Cyprus and Malta, as the team would be taking on more powerful opponents like Belgium and England in June. Dalic has to deal with injuries to key players like Bruno Petkovic and Ante Rebic.

The decision to go with a three-man defence against Slovakia helped Cyprus get a valuable point from the opening group match. Yet, the team remains with a single victory from the last 12 games. Even the solitary victory came against minnows Luxembourg. The team are unlikely to pose stiff opposition to other group opponents like Russia and Croatia. A major positive for Cyprus will be to avoid big defeats going into the June round of fixtures.

Top Betting Odds and Stats for Croatia vs Cyprus

FAQs regarding Croatia vs Cyprus Coverage and Accessibility 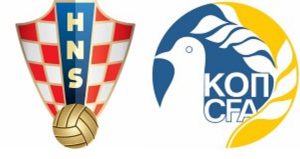 This game will take place at the Stadion HNK Rijeka.

Croatia are the favourites to win this game at odds of 1/7.