Four teams are within two points of the top and Brescia is one of them. In this upcoming fixture, they will face Crotone, which have been one of the weakest teams in the league this season and are likely going to get relegated.

There is only one reason why Brescia are not currently at the top – too many draws and three in the last three rounds. This fixture against Crotone is the perfect opportunity for them to score an easy win and climb all the way to the top.

Crotone have been one of the lowest-scoring teams in home games this season and yet, they still scored 13 goals in 11 games. However, Brescia's defense has improved a lot and the team conceded very few goals in recent weeks. It is a fact that they have the best defense in games on the road out of the entire season – just 8 conceded goals in 11 outings. At the same time, they did not concede even a single goal in their last 4 games on the road. It is curious that the last two games between these two teams had an impressive number of goals – 2:2 and 3:2, but we do not expect to see this again with the high stakes of this match.

Brescia must be disappointed from their recent results – the team had four draws in its last 5 games. The important fact here is that they had 3 of those 4 draws in home games. On the road, they have been quite impressive throughout the season and their recent outings were almost all wins. The team is the best away side with 8 wins out of 11 games, so we think that Crotone will not be a serious challenge. A win here and some luck with the results of their competitors could send Brescia to the top of the league.

As mentioned above, Brescia are the top team on the road in the league and their performances have been outstanding. They scored 19 goals in 11 outings. Crotone are definitely not the best home team and they lost quite a few games recently, while conceding in 9/11 games. Apart from several disappointing results on the road, Brescia scored at least twice in 9 out of their 11 away games this season, which should be enough to convince anyone.

Top Betting Odds and Stats for Crotone vs Brescia

FAQs regarding Crotone vs Brescia 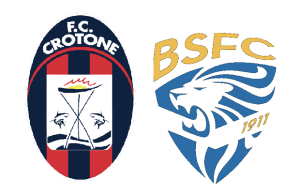 • In which places are Crotone and Brescia?

Brescia and Crotone are situated on the opposite sides of the table. The hosts are the third-worst team in the league with just 14 points won after 22 games. At this point, they have minimal chances to even get to the higher places of the relegation zone. Brescia, in turn, are 4th currently with 40 points, two less than the current leaders.

This game will be played at Crotone's home ground – Stadio Ezio Scida, which has a capacity for 16,547 spectators.

This match will kick off at 17:30 UTC on Wednesday.