Crotone face Cosenza in a match from the bottom of the table. As any other game, this fixture is crucial for both teams that are fighting for their place in the league.

Crotone have not won a match in months and their relegation seems almost inevitable. Cosenza have been slightly better this season and they still have some chance left if they start improving.

Crotone and Cosenza have had an average number of games with over 2.5 goals this season but their most recent ones have been quite the opposite. More importantly, we need to mention the games between them – the teams played five games since 2018 and all five games had less than two goals. That is, 5/5 games ended with 0 or 1 goal total. Crotone and Cosenza are also two out of the three teams that have scored the least goals this season – only 19 and 22 in 24 games. We think that the history between these two teams is good enough for us to bet on the under 2.5 market. Moreover, their performances also suggest the same.

For some reason, Crotone have been placed as a big favorite to win this match and the odds for them scoring under 1.5 goals are a great opportunity. We already described that there has not been a game betwee these two teams with more than 1 goal these past three years. Crotone are also the third-lowest scoring team in the league with just 22 goals in 24 games. Out of their 12 home games this season, Crotone scored more than once in just three games. It is true that Cosenza have a terrible defense but this match is an equally big opportunity for both sides and we expect them to behave accordingly and conceded one goal max.

We have two completely different teams in terms of performance. Cosenza, for instance, have had the lowest number of corners on average in their games. They are also among the teams that have taken the least corners on average this season – 4.13 per game. Crotone, on the other hand, have taken a considerable number with their 5.67 corners per game throughout the season. At the same time, they took 6.00 corners on average in home games while giving their opponents 4.75 per game.

Top Betting Odds and Stats for Crotone vs Cosenza

FAQs regarding Crotone vs Cosenza 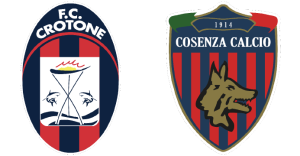 • In which places are Crotone and Cosenza?

Crotone and Cosenza are situated next to each other in the table – both teams reside in the relegation zone. Crotone are the third-worst team at 18th place with 14 points while Cosenza have been a little bit better with their 19th points at 17th place.

This match will take place at Crotone's home ground – Stadio Ezio Scida, which has a capacity for 16,547 spectators.