Fireworks are expected at the Milliy Stadion on Thursday as Group I heavyweights Daegu and Kawasaki Frontale face off on the AFC Champions League. Read our predictions and find the latest odds for the game below in our expert match preview.

Japanese champions Kawasaki Frontale have been turning heads with their performances on the continent this season and they have won all four of their Group I fixtures so far, scoring an eye-watering 20 goals along the way. The Azzurro Nero are already guaranteed a place in the next round of the competition, though they can seal top spot with a victory against their closest challengers Daegu this week. Expect them to grab their opportunity with both hands.

When Kawasaki and Daegu met in late June for their Group I opener, the teams traded blows in a scintillating contest that eventually finished 3-2 to Frontale. Both teams have the technical talent in attack to cause their opponent’s defence similar problems in Thursday’s crucial rematch, and our tip recommends backing over 2.5 goals to be notched again.

In last month’s thrilling encounter, both sets of attackers showed that they hold the key to unlocking their rival’s defence. Goal-hungry Kawasaki and Daegu have scored in 100% of their Group I fixtures so far and we recommend backing both teams to find the net again as a result.

South Korean giants Daegu failed to make it past the Group Stage of last year’s AFC Champions League, though they have already guaranteed their spot in the knockout rounds this time around. Lee Byung-keun’s troops have plundered a hugely impressive 17 goals on their way to collecting nine points from the 12 on offer, with four-goal Brazilian Cesinha the pick of the individual performers so far.

J-League champions Kawasaki Frontale were tipped to make waves in this season’s Champions League and Toru Oniki’s charges haven’t disappointed. The Azzurro Nero’s unmatched 20 goals have been shared by ten different scorers, highlighting just how threatening they can be from multiple areas on the pitch.

Top Betting Odds and Stats for Daegu vs Kawasaki Frontale 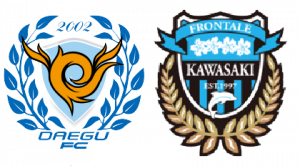 Thursday’s fixture will be played at the Milliy Stadion in Toshkent.

Which player should I watch out for?

Kawasaki Frontale attacker Leandro Damião is one of the best players in the entire AFC Champions League and the Brazilian scored two of his team’s three goals against Daegu last month.