Daegu and Seongnam lock horns on 9th September in a K-League 1 fixture. It is the 29th match of the season for the two teams that are currently occupying the two last spots on the league table. Our preview features free tips, predictions and stats for this match.

Daegu vs Seongnam is a K-League 1 fixture that pits two struggling teams against each other. The hosts have no league victory in their last 12 games. On the flip-side, Seongnam has 4 wins in as many previous league games. The following are the top free predictions for Daegu vs Seongnam by Football Ground Guide:

Daegu to open the scoring

Daegu should score first in this clash with Seongnam. The new manager, Won-kwon Choi, did well in the first home game to bag a point from a barren draw. His second match at home should come with a goal given the visitors remain unpredictable. Seongnam won once and lost four times in the last five trips. The visitors leaked at least two goals in each of the four losses.

We also expect Daegu to score at least two goals in this game. Our second tip is also based on how Seongnam has performed on the road. Seongnam conceded at least twice in four of their last five games, a defensive mishap Daegu should exploit to win this game.

The visitors couldn’t score in only one of their last five away games. And with a better scoring run than Daegu in the last five games, we also expect Seongnam to score in this game.

Daegu has no league win in their last five games while Seongnam has two victories in the last five. Read our team previews below for more fixture details.

Daegu’s poor run of form is a big headache for head coach, Won-kwon Choi. The poor run of results forced the team to hire their current manager, Choi. But after two games, the new head coach has bagged only a 0.50-point average after one draw and one loss. The first home game under the new head coach ended 0-0 before a 4-1 thrashing on the road against Pohang Steelers ahead of this game. But given that Daegu has done relatively well on home soil, there is hope the new head coach could turn things around in his second home assignment. The hosts have three draws and two losses from the last two home games. They failed to score in only two barren draws during that period.

Seongnam last two performances ended with victories. It was a hug reprieve for the visitors who had lost thrice in a row. The on and off form of Seongnam is their only worry because before the three losses in a row, they had suffered a 4-match losing streak. They have not won more than two games in a row this season.

For the highest odds and current stats for Daegu vs Seongnam, see the tables below.

FAQs regarding Daegu vs Seongnam 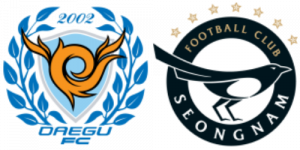 Where will Daegu vs Seongnam take place?

What is the kick off time for Daegu vs Seongnam on matchday?

Who are the top scorers for the two teams so far?

Jae-hyeon Ko is the top scorer for Daegu FC with 9 goals in 29 games while Fejsal Mulic is Seongnam’s leadings scorer with 6 goals in as many games.