The Chinese Super League continues with a new interesting round in the Relegation Group and a lot of curious games that are worth betting on. As a start, we have Dalian Pro vs Cangzhou.

Dalian Pro got the most surprising win in the previous and will now face Cangzhou, whose performances remain on the negative side of things. The team that wins this game could get a comfortable lead in front of the teams in the relegation zone.

We have two teams with completely opposite performances since the restart of the season. Dalian Pro started impressively with two 1:0 wins against direct opponents. Cangzhou, on the other hand, have continued their traditional games with a lot of goals. This will be a difficult game for the visitors, no doubt, but we expect to see them score as their attack has been effective throughout the season. Their problem is the defense and there is hardly any chance that they will not concede in this match.

Most of the teams in the relegation group are quite equal in strength. Dalian Pro and Cangzhou are right about the same but the hosts appear to be in much better form since the restart. Cangzhou got a surprising draw against Shanghai Shenhua, which are on a completely different level but that does not mean that Cangzhou are on the right path. Dalian Pro, on the other side, dominated in both of their games although they won with just 1 goal in both. Cangzhou have not won a single away game this season, so we do not expect them to win here either.

Given that this is a fixture from the relegation group, it is obvious that the teams here are not good at all and they have not been good enough offensively. Both sides have conceded a considerable number of goals and have not scored even close to those numbers. Yet, Dalian Pro appear to be in shape and although they scored just 2 goals in their first two matches, we expect them to net at least twice in this fixture. Cangzhou's defense has simply been terrible and it showed in those two recent games. 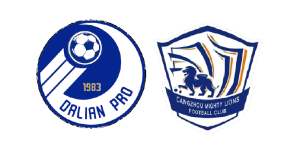 • In which places are Dalian Pro and Cangzhou?

There are 8 teams in the relegation group of the Chinese Super League. Dalian pro currently occupy the 4th spot while Cangzhou are dangerously close to the relegation zone at 6th place.

Both teams have extremely negative goal differences. Dalian Pro have 14:29 while Cangzhou have 16:28.

This game has been scheduled for 7:30 UTC on Saturday, December 18.