Darmstadt is one of the strongest home teams in 2. Bundesliga while Nurnberg is the only team in the league that has not lost a match yet. A win here would put Nurnberg just one point away from St Pauli who are the current leaders.

Darmstadt and Nurnberg have played a lot of matches in recent years and those games have often been among the most thrilling ones for the entire season. Will we see another great game on Friday?

Just take a look at the previous head-to-head matches between the two teams. As we mentioned above, those teams have had some extreme results in recent years – in fact, all official head-to-head matches between these two ever have seen both teams score apart from their first-ever fixture in 2014. Since then, both teams have scored in all official matches. Since the start of this season, Nurnberg has played 5 away games and 3 of those ended at 2:2. A BTTS bet for this match is the most optimal choice.

The odds for this market are surprisingly high given the performance of both teams to date. Darmstadt have been unbelievable at home and are the third-highest scoring team in the league. The team has played 5 teams at home to date and in 3 of those scored more than 3 goals. Then again, Nurnberg has conceded at least 2 goals in 3/5 away games and we already described the matches between these two teams specifically.

To Score In Half – Darmstadt 1st Half (Yes)

Top Betting Odds and Stats for Darmstadt vs Nurnberg

FAQs regarding Darmstadt vs Nurnberg 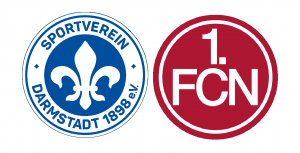 • How many goals have Darmstadt scored at home in 5 games?

The season has just begun but Darmstadt have already established themselves as one of the highest-scoring teams in the league. In 5 matches, they scored 14 goals.

• How many goals have Nurnberg scored and conceded away from home this season?

Nurnberg is not among the teams with the highest number of goals in away matches but this is mainly because the team had two under 2.5 matches besides the goal-packed draws. In 5 away matches, the team's goal difference is 7:6.

• In which places are Darmstadt and Nurnberg currently?

Eleven rounds have passed in the long season of the 2. Bundesliga. Nurnberg and Darmstadt are not far from each other in the upper half of the table – Nurnberg are 4th while Darmstadt are 7th. The point difference is 4.