Dila Gori will face KuPS in their second-leg fixture from the Europa Conference League qualifiers on Thursday.

There is no surprise that KuPS won the first match between the two teams but this second fixture might surprise us in a different way. Here are our predictions for this match.

There is a good chance that this match will be extremely boring after that 2:0 win of KuPS in the first match. We think that the visitors will play a slow match without putting too much effort in scoring more goals. What's important is that this is a team that rarely has overs on the road and most times, they do not concede goals either. KuPS are the better team out of the two but we do not expect much from them either.

As explained above, KuPS are the bigger team out of these two and have a better chance in this second match as well. It is true that Dila Gori have some incredible stats in their domestic stage at home but this is a qualification for Europe against a better side. At the same time, KuPS have some even more impressive stats right now – a single defeat in the last 10 official away games in all tournaments. They are the better team and we think that they will not lose even if they do not win either.

KuPS have a solid defense and do not concede a lot of goals – home or away. We think that the team will play defensively after that easy fixture last week and that promising 2:0 win. They do not need to focus on attacking or scoring goals – keeping the result as it is is more than enough. Dila Gori can score goals and they have proven it on the domestic stage but we expect them to finish this venture without a goal.

Dila Gori have been one of the best teams in Georgia for years but the past season was definitely not their best. Yes, they finished near the top but their stats are much weaker than those of the other main contenders and the champion. Right now, the team is valued at 4.58 million euros, which is not a small number for a team in Georgia.

The level of the Finnish football elite is much higher than that in Georgia and it is normal that KuPS are the better team. Moreover, KuPS failed to win the championship last season after finishing one point after the new champions. Their defense is incredible and their attack is also one of the best in Finland. Curiously, they are not valued much higher – the team is worth about 5.05 million.

Top Betting Odds and Stats for Dila vs KuPS

FAQs regarding Dila vs KuPS 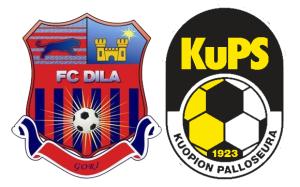 In which places did these two teams finish the previous seasons?

As mentioned, KuPS had the unfortunate experience to lose the title in the final few rounds and finished 2nd. On the other end, Dila Gori finished 3rd in Georgia.

This fixture has been scheduled for the Tengiz Burjanadze Stadium in Gori.